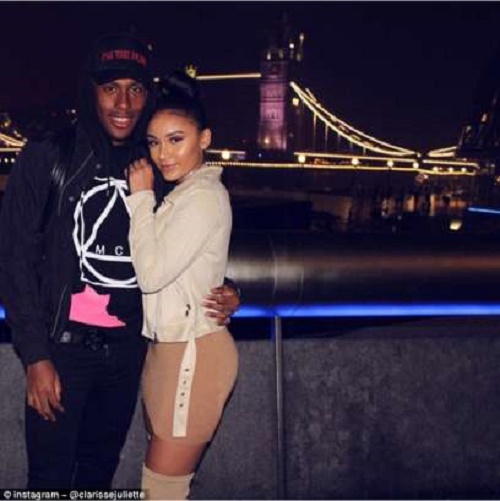 It seems like the sweet romance between Arsenal striker, Alex Iwobi and his girlfriend Clarisse Juliette is over following allegations of cheating.

Nigerian footballer, Alex Iwobi  has been dumped by his girlfriend of 4 years, Clarisse Juliette.
It is alleged that the UK-based model made the decision after Iwobi reportedly cheated on her. Juliette had also written about the breakup saying: “Once a cheater, always a cheater. It’s true people don’t change.”
The duo while together were constantly sharing their photos on social media. But, all that has changed as the former couple has however deleted each other’s photos from their social media pages. The only photo of Iwobi on Juliette’s Instagram page, has the 21-year-old Arsenal star cropped out. They are also no longer following each other on Instagram.
Alex celebrated his 21st birthday and didn’t get a birthday shout-out from Juliet. She was also noticeably absent at the birthday celebration which held in Alex’s parent’s house in London.
Even when Clarisse celebrated her birthday on May 2nd, Alex gave her no shout-out. He was also absent at the celebration. Juliette shared a video on her Snapchat of her holding some dollar notes with the caption ‘you’ll never get your bitch back’.
Alex Iwobi’s Girlfriend Dumps Him After 4 Years was last modified: May 17th, 2017 by Arinze Ago