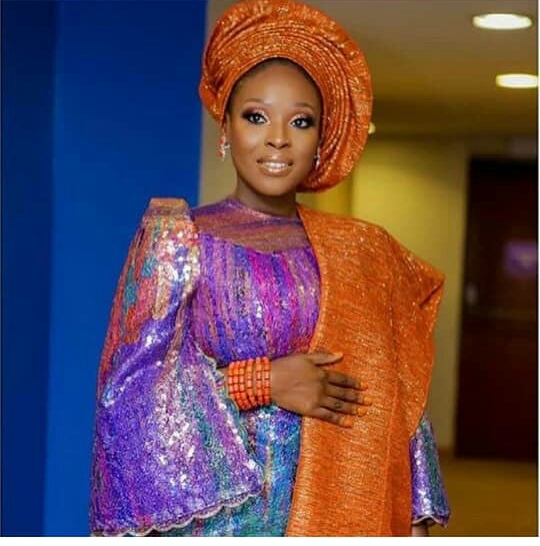 The beautiful wedding between Temidayo, daughter of Ebony Life TV boss, Mo Abudu and Adebola, son of Carveton Helicopter boss, Remi Makanjuola shut down Victoria Island yesterday when celebrities from all walks of life stormed the Oriental Hotel venue for the engagement and reception party.
It was a colourful wedding where guests turned out in their lovely babypink aso ebi for the event. Citypeople’s Society Editor, TAYO FAJORIN OYEDIJI and Senior Showbiz reporter, BIODUN ALAO brings you snippets from all what went down at the almost 7 hours event.

The beautiful bride rocked a beautiful traditional outfit from Couture by Tabik and her make up was done by bimpe Onakoya. Temidayo Abudu is a producer who has created a name for herself in the entertainment industry in Nigeria as a daughter of media mogul and EbonyLife TV CEO Mo Abudu.Temidayo’s love story started when she got engaged last year to her beau, Adebola Makanjuola popularly called Eddie Makkie. She is a London graduate of Management and Marketing. The groom, Adebola is currently the Project Manager at Visionscape and was once the document Controller, Caverton Offshore Support Group Plc. He has a Master of Arts – MA Field in Global Business Management and Leadership and his bachelor’s degree at the University of Portsmouth in Field of Study International Business/Trade/Commerce, He also went to Regent’s University in London. His mum is Mrs Casandra Makanjuola while his Dad is the billionaire businessman, Carverton Helicopter boss, Chief Remi Makanjuola.

MO ABUDU LOOKED LIKE A BILLION DOLLAR
ive it to the stylish bride’s mum, she made heads turn at her daughters party, she was rocking a beautiful silver grey all sequenced dress with an expensive silver shoe and purse to match.One thing you will quickly notice on her is her dazzling diamond necklace which we gathered ran into many millions of naira.She changed to a beautiful powdered colour chantilly lace in the evening.

KING SUNNY ADE WAS AT HIS BEST
The king of world beat, King Sunny Ade mesmerised the audience.He performed for over 4 hours and there was never a dull moment. Many celebrities were on their feet all through dancing and spraying ceaselessly on themselves.

VINTAGE BAND AND BURNA BOY WERE NOT LEFT OUT
The duo of vintage band and star artirst burna boy thrilled guests. It was a mix of all genre of music from vintage band and burna boy performed many pf his hit songs specially for the couple.

NOLLYWOOD STARS STORM THE PARTY
it was highly expected that the event will be full of showbiz stars. They came out enmasse to support Mo Abudu who has given them a high platform to showcase themselves to the world on her TV channel. Amongst the nollywood actresses who stormed the event were Kate Henshaw, Dakore, Nancy Osime, Beverly Naya, Omotola Jalade, Funke Akindele, Ireti Doyle, Li da Ejiofor, Joke Silva, chigurl, Star actor, RMD, Sulaiman Ibrahim, inidima Okojie and many more.

POPULAR COMEDIENNE,CHIGURL WAS THE COMPERE
Popular comedienne, Chioma Omeruah best known as Chigul who doubles as a singer and actress who is also known for her accents and comedic characters was the compere for the wedding and she delivered all her lines appropriately.

ALIBABA AND WIFE, MARY WAS THERE
King of Naija Comedy, Ali baba was at the event with his beautiful wife, Mary Akpobome. They were also seen sitting on the high table.

OONI OF IFE SPOTTED IN A NEW E-CLASS BENZ
The paramount ruler of Ife Kingdom, His royal majesty, Ooni of Ife, Oba Adeyeye Ogunwusi honoured Mo Abudu at her daughters wedding. He got to the venue at about 5pm in hisnew customised white E-class Benz and did not leave until late in the night after spending several hours.He was the royal father of the day and got a rousing ovation when he stepped into the reception venue.

1 WEDDING – 3 ASO EBIS
Mo Abudu’s daughters wedding was one that made a whole lot of style statements from many showbiz stars and celebrity women who stormed the venue on their beautiful outfits. There were 3 aso ebis picked for the wedding and first set is 55k, 70k and 95k which totalled about 220k.

EXPENSIVE GIFTS AS SOUVENIRS
If you look left, right and centre in the hall, almost all guests were seen carrying one gift or the other, the invitation cards given to guests included gift cards and everyone was seen with many different gifts from big boxes, hampers, and other packages.

WATER TIGHT SECURITY
If you were not invited for the wedding, you have no business at oriental hotel that day because it was an all access card entry event. Infact you can not even boycott any entrance of the hall. Both entrances were gated and manned by security men from KSquare securities. It got to the extent that, after dropping your access card while going in, on your way out,they give you another one again to re-enter, so the event was only for the selected few.

CORPORATE TITANS WERE THERE
It is expected that corporate celebrities will grace the party because Mo Abudu belongs to both sectors of the social milieu, she could be described as a society woman or a corporate woman. Many bigwigs in the corporate sector turned up to honour her.

AND SUPER RICH CELEBS TOO
Counting in figures, the celebrities at the event were up to 95 percent, she did not pull crowd but pulled dignitaries. Many celebrities especially women trooped all out to celebrate with her.

ALL THE CELEB GISTS FROM MO ABUDU DAUGHTER’S CLASSY WEDDING IN LAGOS was last modified: March 26th, 2019 by Tayo Oyediji