Home News Am sorry!! Thierry Henry apologise for calling a player’s grandmother a ‘whore’ on the pitch
News 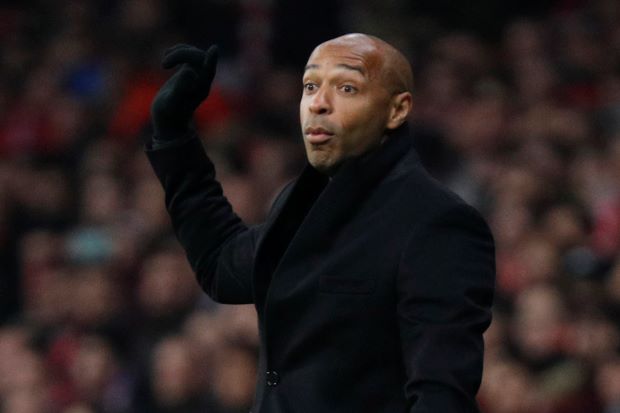 The game of football, no doubt has been seen to be a very passionate game, that at times both fans,players ,coach get to just forget that its all about the round latter game.

This was the case of the current Monaco coach Thierry Henry, as he was pushed and he just lost it and shouted out with abusive words.

Arsenal and France legend, has been forced to apologise after calling a player’s grandmother a ‘whore’ during his team’s 5-1 defeat by Strasbourg on Saturday.

The former striker was caught on camera clashing with Kenny Lala from the touchline as the defender took a throw-in near the dugouts just before half-time.

This would be his first managerial job with the Ligue 1 side in October, felt the Strasbourg star was wasting time with his side 2-1 up, and then shouted: ‘It’s the 43rd minute, your grandmother’s whore.’

Speaking during his press conference on Sunday, the 41-year-old apologised for his comments.

‘It’s an expression of the street, unfortunately,’ he said.

‘I regret my comments from the bench. It was a human reaction, I’m still human. I regret it.

‘Sometimes I do it in English. Maybe in English, it wouldn’t have been as noticeable. No, I’m joking. I should not do it.’

Am sorry!! Thierry Henry apologise for calling a player’s grandmother a ‘whore’ on the pitch was last modified: January 21st, 2019 by Igbokwe John

OLU ITORI Set To Celebrate 15 Yrs On The Throne

How LAGOS Govt Is Reducing Quaks &...