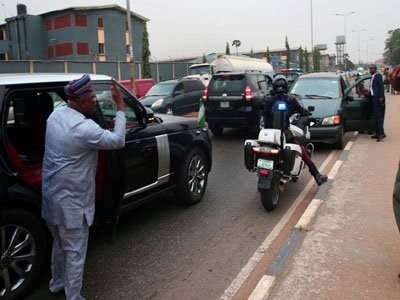 Lagos State Governor Akinwunmi Ambode played the cop on Monday as he arrested some motorists, including a soldier for driving against traffic.

The governor was on his way back from Abuja when he caught the motorists taking ‘one way’ to beat the traffic on the airport road in Ikeja.

He came down hard on the soldier who drove a space bus marked JJJ 290 AC. The soldier, the governor said, should know better as a security personnel.

Ambode, who alighted from his car, reprimanded the soldier for showing bad example.

The governor was returning from Abuja where he attended the inauguration of the All Progressives Congress (APC) Presidential Campaign Council.

Ambode arrests soldiers, others for driving against traffic was last modified: January 9th, 2019 by Igbokwe John