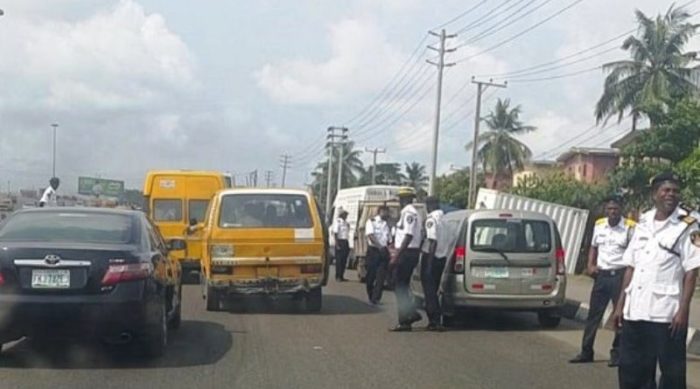 According to PM News, the VIOs, under the Vehicle Inspection Service, VIS, had left all Lagos roads on the order of Ambode.

Government sources said the governor ordered the VIOs out of the road for retraining as a result of public complaints and in a bid to reposition the outfit.

A source told PM News that the story carried by a national daily recently which alleged that the VIOs burnt to vehicle of a motorist arrested had not gone down well with the governor who would not tolerate unruliness in his administration.

Asides this, some complaints about supposed high-handedness and over-zealousness of some VIOs were other reasons the governor ordered them out of Lagos roads until further instruction.

A VIO source told our reporter that the officers had been ordered by the governor to go on compulsory retraining on the use of modern technology in order to be humane in dealing with the public.

It was gathered that the no training had been arranged since the officers left the road last week as they were still watching and waiting for the next action to be taken by the state government on the matter.

A top government source who does not want his name mentioned said the order by the governor for VIOs to vacate Lagos road was unconnected with the alleged report of assaulting a motorist and burning the vehicle.

A VIO source alleged that the driver lied against the officers as the agency could not have carried out such debilitating action.

A source added that the Ministry of Transportation was working frantically to arrange training for VIOs so that they could get back on the road soonest, but that for now, they would be off the road on the order of the governor.

Ambode Kicks VIOs Out Of Lagos Roads was last modified: May 8th, 2017 by Reporter