Home News American Gods – Why do we shun our own deities?
News 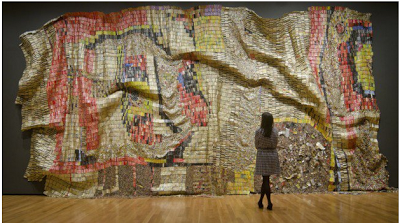 An American TV show features African gods that we shun from showing.

There is a new TV show in town and before you groan that another series is out this one rocks.

‘American Gods‘ is an American TV show that pits old gods against new gods. What makes this show interesting for Nigerians and Africans is that there are quite a few gods from our continent.

We have Bilqis (Queen Sheba), The Jinn (otherwise known as a genie), Ibis and Anubis both Egyptian gods, as well as Anansi, the spider god from Ghana.

Yetide Badaki as BIlquis, the goddess of love, on “American Gods.”

These gods help give American Gods its fair quota of African supernatural beings. The show so far has strong reviews thanks to the heavy dose of mythology sprinkled with sex and very graphic violence.

Who would think a show about gods from Africa and the Middle-East would be a hit? The series is refreshing because it’s not every day we see African deities portrayed as the good guys.

In Nigeria or rather Nollywood, deities are portrayed as part of the evil gang, the bad guys in the fight against light and darkness. At a point in time late 90s-early 00s, Nollywood was fixated on producing movies that depicted this. Missionaries would swoop in on a village and chase the traditional gods after a spiritual tug of war of lightning, thunder and earthquakes.

Regina Askia in Festival Of Fire

This formula of producing spiritual/Christian thrillers is a reflection of the attitude of most Nigerians towards ancestral gods.

With the advent of Christianity and Islam, deities were tossed aside and have been perceived with a bad/evil filter ever since. Little do we know that these gods were not used for evil purposes. People prayed to them for fertility, success, good luck, victory and wealth.

They have back stories and tales of their own but they have been ‘whitewashed’ to make way for modern day religion.

playOgbakiri in the Nollywood movie ‘Oracle’

This hasn’t stopped us as Nigerian from watching Hollywood depictions of Norse, Greek and Roman gods. In our heads, foreign gods okay, Nigerian gods bad. We line up to watch Thor, a Norse god but give a cold shoulder to Amadioha and Yemoja.

Yes, in 1997 Obafemi Lasode released the epic movie Sango, the tale about the legendary Oyo king later became the god of thunder. The movie sold out. To be fair, the Yoruba movie industry flirts with historical tales of Yoruba gods but in mainstream Nigeria that is not the case. We shy away from them.

Maybe there is a way to portray the history of our culture through these old gods without conflicting with our Christian or Islamic beliefs.

It is until we try that we know. Not every movie should end with ‘To God Be The Glory’.

American Gods – Why do we shun our own deities? was last modified: June 5th, 2017 by Daniji Emmanuel

Why Primate AYODELE Will Not Be A...