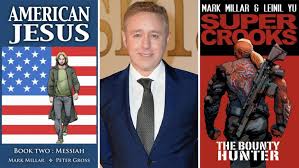 In “American Jesus,” a 12-year-old boy suddenly discovers he has returned as Jesus Christ and can even raise the dead.

Netflix is working on several projects based on Mark Millar’s works.

One of those projects is “American Jesus,” a series based on the comic book writer’s stories.

Set for six episodes, “American Jesus” is a multilingual series in Spanish and English about a 12-year-old boy who suddenly discovers he has returned as Jesus Christ and can turn water into wine, heal the sick, and even raise the dead.

The comic which the series is based on was initially published as Chosen in 2004, but was changed to American Jesus for its trade paperback collection.

Everardo Gout, who helmed “Luke Cage,” and Leopoldo Gout will work on the project as co-showrunners and executive producers, with Everardo also serving as the director.

Netflix is also developing a series based on Millar’s “Jupita Legacy.” Set for eight episodes, the upcoming series will follow the world’s first generation of superheroes, who received their powers in the 1930’s.

In present day they are the revered elder guard, but their superpowered children struggle to live up to the legendary feats of their parents.

This multiple-project order announcement by Netflix comes a year after the streaming company acquired Millarworld, a comic book company which has birthed hit movie franchises such as “Wanted, Kick-Ass” and “Kingsman.”

“American Jesus” – Netflix is making a show about a 12-year-old boy who returns as Jesus Christ was last modified: July 18th, 2018 by Igbokwe John