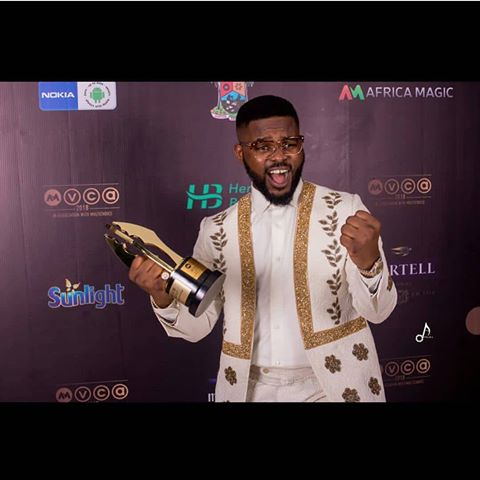 Nigerian singer Folarin who is also the son of human rights lawyer and Senior Advocate of Nigeria, Femi Falana popularly known as Falz will now go down in history as the first Nigerian artiste to win two major movie awards.

The rapper won his second acting honour on Saturday at the sixth edition of the Africa Magic Viewers Choice Award (AMVCA), which held in EKO Hotel and Suites, Lagos.

Falz first bagged the award in 2016 for his role in TV drama series, Jenifa’s Diary.

The University of Reading-trained lawyer won the second award for his role in ‘New Money’. He won for the Best Supporting Actor.

Some of the movies he has featured in include ‘Couple of Days’, ’10 Days in Sun City’, ‘Muna’, ‘Merry Men: The Real Yoruba Demons’.

Adekola, who is popularly called the king of memes, was nominated for his role in ‘A Million Baby’.

Jalade-Ekeinde was nominated for her role in ‘Alter Ego’.