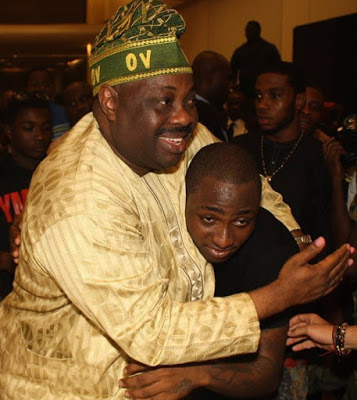 It seems the brawl between the Momodus and Adelekes is not over yet. The rift between Sophia and her baby daddy, Davido took another dimension when Davido blatantly disregarded the presence of the veteran publisher, Dele Momodu and went on stage to mime his controversial line that suggests the fight is far from being over.

He mounted the stage as seen in the video and stated “Dele na my boy” consistently until the subject of controversy, Dele Momodu walked out of the event

Dele Momodu who is his daughter’s uncle, quietly stood up and left.

Watch the video as posted by Instablog9ja

Pissed Dele Momodu walks out of a recent event after Davido called him his boy, live on stage

Angry Dele Momodu walks out of an event after Davido sang ‘Dele na my boy’ on stage was last modified: December 28th, 2016 by Reporter

Aww.. What a touching birthday message to Uche Jumbo from Jim Iyke