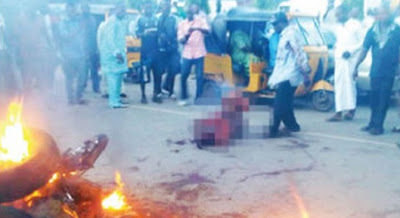 A suspected armed robber was on Tuesday night set ablaze by an angry mob around at Estate Roundabout, along the Okumagba Avenue, Warri South council area of Delta state.

According to The Nation, two other suspected members of the armed robbery gang were reportedly arrested by policemen, while a fourth suspect reportedly escaped both death and arrest.

According to sources, the four-man gang was reportedly busted in the process of attempting to dispose of a tricycle driver, popularly called Keke NAPEP, of his vehicle.

It was further gathered that the tricycle driver raised the alarm on his assailants, calling the attention of other tricycle drivers and passersby around, all of whom rushed up to give the fleeing suspects a chase.

The only suspect, who was caught by the chasing mob, was immediately set ablaze before the arrival of security agents to the scene. Policemen from the ‘B’ Division of the Warri Police Area Command later arrested two other members of the robbery gang.

Confirming the development, the Delta state Commissioner of Police, Muhammad Mustafa, said “they were caught trying to rob a Keke. One escaped, two were arrested and one was set ablaze”.

TINUBU WILL BE HUMBLED, ADELEKE WILL TRIUMPH...