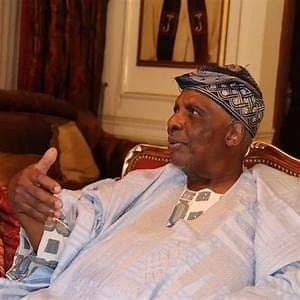 Ibadan has lost another industrious son, the parakoyi of Ibadanland, Chief Bode Akindele is dead. He was the father of popular Lagos Fashion Designer, Tiffany Amba.

The industrialist who was also the Parakoyi of Ibadanland and the Chairman of Madandola Group, was a successful entrepreneur and a renowned industrialist in Nigeria.

Chief Bode Akindele was born 87years ago, precisely on the 2nd of June 1932. His father, Pa Joshua Laniyan Akindele, was a Chief Tax Clerk for the whole of the Western Region and as such hisposition can be equated to that of the Chairman of the Inland Revenue today and his mother, Rabiatu Adedigba, was a wealthy Ibadan trader who was politically influential. It is interesting to note that Alhaja Rabiatu was the first woman to go to Mecca in Ibadan.

Chief Akindele’s business empire operates under the name Modandola Group Of Companies, named after his mother, which translates to ‘God, if you give me the wealth, give me a child that can take care of it.’ Madandola Group spans from maritime to properties, manufacturing, real estates, investments, finance and flour milling with its headquarters in the United Kingdom.

The Fairgate Group, (a company owned by Chief Akindele, located on Bond Street, London, England), deals mainly in properties. Some of its tenants include giant retail stores like Sainsbury and Asda Wall Mart. As at the last quantification, the Fairgate Group was said to be worth over a billion pounds sterling.

Among the subsidiaries of the Madandola Group making waves in the business world include Standard Breweries, Ibadan, Diamond Foods Ltd, Ibadan, United Beverages Ltd, Ibadan, Associated Match Industry, Ibadan, merged with Ilorin, Port-Harcourt and Lagos to form a company with a large share of the Nigerian market and Standard Flour Mills in Lagos.

Bode Akindele was not born with a Silver spoon. His encounter with schooling was quite an interesting one. He would help his elder brother carry his school bag to Baptist School, Idikan, Ibadan, when they lived in Mapo, trekking the distance. He later enrolled at Olubi Memorial School Ibadan. He attended Lisabi Commercial College, in Abeokuta for his secondary school education. Though he had wished to attend Grammar School or Boys High School just like his friends, he was restricted due to his inability to pass the arm test. However, the business mogul believed that it was God who was preparing him for something great in life.

Basically, feeling inferior being in a commercial school could be quite understandable. Most parents wanted their children to become lawyers and doctors and for that reason commercial education was a no go area as it was not so popular. Today, Akindele is of the opinion that it was at the Commercial School that he received the training that has helped him in building a successful business in life.

After completing his secondary school education, Akindele and a couple of his friends had nursed the idea of traveling to the United Kingdom to study Law, but the growth of his business activities eventually took precedence. Like his other peers, he was given money to obtain a passport but rather than go for the international passport, the young Bode, who was more business inclined at that time, used the money to place an order for a sewing machine which he sold at good profit.

He got his first paid employment in 1952, as secretary to an assistant district officer and later became a cadet manager with the United Africa Company (UAC), where he was an assistant to the expatriate manager at Oyo. Akindele left UAC foods for the Western Nigerian Union of Importers and Exporters.

Akindele realised that becoming a civil servant, which his father had desired, was not what he wanted to do. He had developed a good business orientation during his college days. He helped his mother who had a factory in the North where dried meat is prepared for the market in the South.

He registered his first company at the age of 20, sourced for goods from anywhere in the world as he sold everything, including medicine, which he got from a pharmacy in Lagos.

He was one of two federal agents out of a dozen in Lagos for whom the produce trade was profitable. He bought land in Agege, a Lagos suburb and constructed a 80ft by 350ft warehouse where he stockpiled and grade cocoa.

The importation of goods and the high volume of cocoa exports led to an interest in clearing and forwarding and road haulage. A company was set up (Coastal Services Ltd.) and that led to the termination of patronage with Umarco and Panalpina.

Later, he became a shipping agent, chartering vessels in London and using old school connections with the National Bank of Nigeria which had opened a London office in 1956, to finance his transactions.

During the 1970s, the Group opened a large roll-on roll-off (RORO) terminal and warehousing operation at Tin Can Island port. The RORO Terminal Company was the managing agent of the Nigeria Ports Authority for RORO terminals in all Nigerian ports. The Group also started fishing venture after securing four trawlers from Ghana in 1971. Obelawo Farcha Fishing Industries Ltd currently has a fleet of 28 trawlers and five shrimpers are under construction. In the early 1980s, the Group expanded into boat building and ship repair as well as dry-dock facilities in a joint venture with Damen Shipyards of Holland.

A new phase in the development of the Group began with the start-up of manufacturing and process industries at Alomaja, a village very close to Ibadan. These included a large brewery, biscuit, plastics and soft-drinks (the largest single unit in Nigeria) factories, four match factories acquired from Lebanese owners and a large flour mill with $80 million invested.

The group has also been active in construction, real estate and equity investment and farming. Its first experience in construction was a joint venture with DC Savage, an American company that built the US embassy in Lagos and the Lagos Durbar Hotel. Savage left Nigeria and the Modandola Group sustained some losses before it closed down operations. The Group opened a full service-advertising company, Oricom (Nig.) Ltd in 1983. Initially, the agency did well and made publicity through the ‘Oricom Lectures’, sponsorship of beauty competitions and sporting events.

To honour his mother, the octogenarian and philanthropist decided to build the ARAMED Medical Centre in Ibadan to assist human kind in the society. Just like the Modandola name was one of his mother’s names, ARAMED is also named after his mother as it stands for Alhaja Rabiatu Adedigba Medical Centre and regards ARAMED as the healing ministry of Bode Akindele Foundation.

Chief Bode Akindele in no doubt was a man of esteemed virtues . May his soul rest in peac