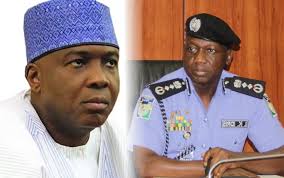 Senate President Bukola Saraki has alleged a threat to his life and those of his family in Ilorin, Kwara State.

He accused thugs allegedly sponsored by the All Progressives Congress (APC) and the police as the brains behind the alleged move to eliminate him and his family.

Addressing reporters in Abuja yesterday, Saraki who doubles as the Director General of the Peoples Democratic Party (PDP) Presidential Campaign Organisation, claimed that on Thursday, APC thugs “shielded by policemen went to my family quarters in Agbaji in Ilorin and vandalized houses, shops and inflicted wounds with matchetes on three people.”

He said: ”All these destructions took place in the presence of policemen who came with them but watched without any care, as the APC thugs and supporters unleashed violence on our people.

“For me, personally, I believe the decision to attack people and properties in my family ancestral compound is a direct affront and attack on my person.

“And whatever signal these APC elements with support from the police believe they are sending is definitely sinister, uncivilized and unfortunate.”

The Senate President said the police continued to show undisguised hostility towards him and his supporters in the state.

The former Kwara State governor said reports of the attacks were filed in relevant police stations in Ilorin, but expressed doubts that anything tangible and constructive would come out of the reports.

He stated further that as part of the plot, the police, under the directive of the Inspector General of Police, Mr Ibrahim Idris, on Thursday, commenced the transfer of Divisional Police Officers (DPOs) out of Kwara State.

Saraki called on Nigerians and the entire world to hold the IGP responsible should anything untoward happen to him and members of his family.

“While the police are free to take decisions on the deployment of their personnel, we found the postings in Kwara State strange and more than a mere coincidence,” he said.

“It should also be noted that IGP has posted three different Commissioners of Police to Kwara State in the last six months. In fact, the previous and current Commissioner of Police in the state got strict instructions from the IGP not to relate or engage with the Senate President”, Saraki added.

According to him, the usual practice has been that the Commissioner of Police personally ensures the security of the Senate President whenever he visits his home state.

APC Thugs Are After My Life And Family – Sen President Bukola Saraki was last modified: January 12th, 2019 by Damilare Salami