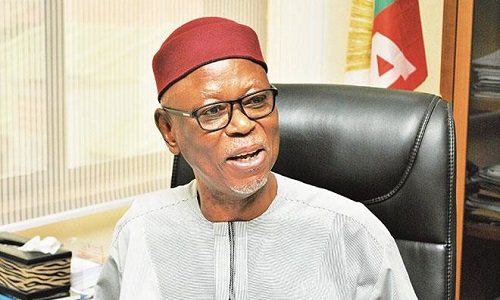 The All Progressives Congress, APC’s National Chairman, Chief John Odigie-Oyegun, has faulted some appointments made by the President Muhammadu Buhari-led administration.

Describing the appointments as improper, Oyegun said that such appointments had caused tension in the APC in the past two years of being in power.

Oyegun stated this yesterday in Abuja while reviewing the activities of the APC administration in its two years in office.

The APC leader, however, expressed his satisfaction with the performance of the Buhari administration, adding that having rebuilt and gradually returned the econ­omy to the present stage, the government would use the remaining two years of its mandate to deliver the ben­efits of democracy and the desired change it promised Nigerians.

Oyegun said, “I must be very honest and frank, the reward system and appointment hasn’t been as pleasant to the party as it ought to be, part of them haven’t been well thought out as it ought to be.

“We have cases which wouldn’t have happened where individuals who are in court with our elected officials, one case a governor which is now at the Supreme Court has been given ap­pointments.

“We have cases at least one or two known cur­rent appointees of the PDP have been given, we have cases where in a particular state from the same local government, I think going to the same ward, three people have been given appoint­ments and these things and many more is that we have a lot of cases where faces not known to the party during the most difficult part of the struggle have gotten appoint­ments. So, it has caused a lot of disquiet within the party.

“Yes, we have had two hard years of blocking all the loopholes; two years of re­building the fractured natural resources; preparing a new base of economy blue­print for the Nigerian nation to take off. It has started to bear fruit but until it sits down the ordinary man will not recognise that we have taken the turn for the home stretch.

“In the next two years, we expect massive implementa­tion; accomplishment as far as the new railway system is concerned. I think they will finish the Lagos-Ibadan end by the end of next year and most of the others, people will see them generate in­come and employment.

“In the field of solid minerals, a lot of work has been done and also a lot of interest is being generated by those who want to process locally.

“Those are some of the things that are happening; minerals are being shipped abroad in large quantity and a lot of these are going to be processed locally with back­ward integration in mining activities,” he said

APC’s National Chairman Oyegun not happy with PMB’s appointments in the last 2 years was last modified: May 30th, 2017 by Reporter