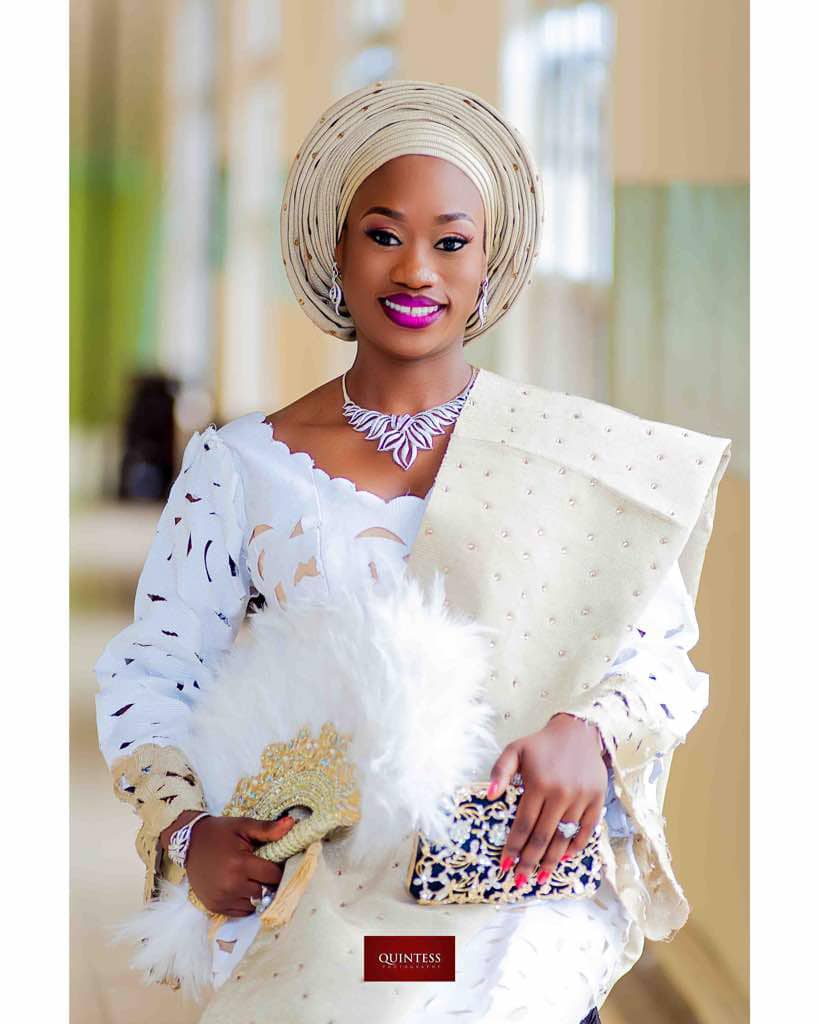 Saturday 27th October would remain an unforgettable day for the families of Andu and Kafidipe as they joyfully hosted dignitaries from all walks of life to witness the nuptial knot between their daughter Adedoyin Aisha Andu and their Son, TaiwoTaofiq Kafidipe. Arabel boss, Mrs Shareefah Andu, her Husband Mr Muyideen Andu and Alhaji Abdulfatai & Alhaja Kudirat Abimbola Kafidipe had the presence of Big wigs in Politics, captains of industries, Clerics, Lawmakers for their children’s Big Day. The display of affluence and class is worthy of note, as both families planned big for the day. Did we tell you that that is just the Ibadan Edition and the Lagos Edition is coming up on the 4THof November 2018?

The joy on Taiwo’s face knew no bounds He was seen dancing happily at the slightest sound of music as he could not wait to take home his wife. He is sure a lucky man because Adedoyin’s beauty is out of this world, coupled with an amazing stature that would arrest the heart of any man who has an eye for elegance. How about the beautiful smile and radiance from Adedoyin Aisha, the bride. It can’t be measured as these lovebirds were caught giving eye contact to each other. Beauty is not just in the eyes of the beholder but also in eyes of the beauty queen who dazzled in different attires for her big day.

The 3-n-1 classy event was Nikkah, Engagement and Reception And it had two venues. Bodija Housing Estate Central Mosque, Awolowo Avenue, Old Bodija Ibadan was the venue for the Nikkah, while Civic Centre Ibadan was for the venue for the Engagement and Reception. The ambience at these venues was second to none. City Peoples Society Reporter TITILOPE OGUNLEYE and Photo Journalist MATHEW IDOWU were at both venues to give you hot gists from the grand wedding.

The Nikkah ceremony commenced at 10 am and it was conducted by Imams, Sheik, Sheus and Alfas of great calibre from Lagos and Bodija housing Estate Central Mosque. They were present to tie the knot between Adedoyin and Taiwo as a symbol of Unity and oneness as Mr Muyideen who was the father of the bride joyfully walked his beautiful daughter down the aisle. According to one of the clerics present, who emphasized the essence of love, unity, trust and submission in marriage, he also spoke on the need for mutual understanding, respect and cooperation as a tool for a successful marriage.

He also laid emphasis on the need for the couple to satisfy each other’s needs, be it sexually, emotionally, financially, spiritually and in all ways. He was of the opinion that the newly wedded should not copy negative trends or allow the third party in their relationship as husband and wife and he showered prayers on them for a fruitful, progressive and flourishing union.

Chief Adesola Oke popularly known as Igbeyawo Alayo anchored the engagement at the Civic Centre, Ibadan. Her good carriage and creativity in anchoring wedding engagement have made her stand out over the years. She and her group strictly anchor traditional weddings and engagements And she has been able to carve a niche of excellence for herself in that field. Known for Glamour and Glitz, Igbeyawo Alayo did justice to the show, from the way she sang and welcomed the groom and bride’s family to every bit of the programme. We must say she had left no stone unturned.

The families of Kafidipe and Andu are from popular cities in Ogun State. Kafidipe is a household name in Egbaland while the Andus are from a reputable family in Ijebu Remo. The C.E.O of Arabel, the exquisite home of Islamic materials, Mrs Shareefah Andu is the beautiful and amiable mother of the bride and her husband Mr Muyideen Adeniyi is one of the top-notch business moguls.

Alhaja Kudirat Abimbola and Alhaji Abdulfatai are the reputable parents of the groom. They have been to the holy land Of Mecca as that is one of the instruction of prophet Muhammed(SAW) to Muslim Faithful who have the financial capacity to. The groom and brides parents were powerfully dressed in beautifully patterned OFI attire with exotic pieces of jewellery to crown it. The families were welcomed by the Alagaiduro and Alagaijoko as they came in dancing with joy.

THE GROOM- A GREAT DANCER

It was so obvious that Taiwo the groom is a skilful dancer and the people’s man, judging from how more than 20 of his friends served as his escort when he danced into the hall. Taiwo is not just a great dancer but also a powerful dresser. He danced in dressed in a white Ofi and a gold cap to match. Like that was not enough, Taiwo rocked a walking staff like a royalty that he is. His friends showed him love by spraying crispy naira notes from the entrance of the hall till they got the Alagas who gave them the next instruction. Taiwo and his friends prostrated to greet his in-laws and his parent before he moved to the specially decorated seat separated for him. The Alaga engaged Taiwo’s sworn mate Kehinde for a twinned dance after she requested if she has released him for his wife and she answered yes joyfully.

THE BRIDE- A BEAUTY TO BEHOLD

Adedoyin, the beautiful bride graciously danced into the venue, in the company of her friend who also looked gorgeous in a purple Aso-ebi. The bride looked radiant in her white Ofi dress and a pink and gold strip Gele to match. Adedoyin specially requested for the unique sound of the traditional drum showing that she holds the cultural values and sounds of Yoruba in high esteem. Alhaja Kudirat, the groom’s mother joined her in dancing to give a warm welcome. She knelt down and received prayers from her parents as well as from her husband’s parents too.

PROPOSAL AND ACCEPTANCE LETTER WAS READ

Munirat, a slim tall beautiful young lady was invited to read the letter amidst dancing. She read the letter audibly to the admiration of many. The Alaga requested that she should be honoured for a job well done.

The chairman of the occasion was Dr Wale Babalakin (SAN). He is the Chairman of Bi-Courtney and also a recipient of the Nigerian honour of Officer of the Federal Republic in 2007. He spoke on his friendship of several years with the bride’s father who was his senior at Government College, Ibadan. He admonished the couple to let God and love reign in their home. He also prayed for them that God who has sustained their parents’ marriage will sustain theirs.

HON ABIKE DABIRI EREWA HANDLS THE CUTTING OF THE CAKE

READ ALSO: ABOUT MAMA ANTHONIA ABEKE OGBAMOLA IN HER LIFETIME

2018 Cocoa Festival Train Sets Off From The UK