Home News Archbishop GODWIN ELEMOBOR Dies In The US
News 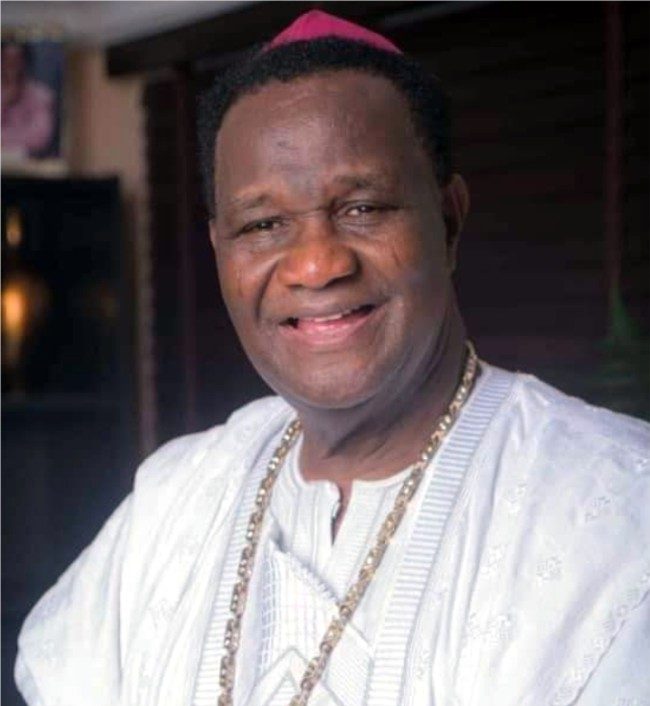 The statement reads: “It is with gratitude to God and with heavy hearts that we announce the glorious transition of our beloved father in the Lord, Arch-bishop Godwin Imuetiyan Elomobor, the General Overseer of the New Generation Bible Church Int. “He was aged 66 and passed on to glory on Saturday, 8th of January, 2022 (about 5 pm Nigerian time) 10 am in Tulsa, the USA after a protracted illness”

As we mourn the departure of our dear father, we covet your prayers for the Elomobor family and the New Generation Bible Church, worldwide. Goodnight God’s general, Arch-bishop Godwin Imuetiyan Elomobor”. Going by his instructions, he has since been buried in the U.S. In his lifetime, he has dual citizenship. The burial started on January Friday, 21st with the main funeral taking place on Saturday 22nd, 2021 at Flora Service Home, Oklahoma, USA. The bishop is survived by his loving wife, Rev(Mrs) Anthonia Oyebola Elomobor and his children. Let’s tell you more about him.

Bishop Elomobor was born on April 15th 1955 at Ekpoma, Edo State, Nigeria. He attended Primary Schools at Ekpoma and St. Matthias Catholic Boy’s Primary School, Lafiaji Lagos. He then proceeded to Federal Government College, Warri. He spent one year for preliminary studies at Uniben 1975/76. He had his university education at the University of Ife where he graduated with honours in Economics in 1979 and won an award in banking at the National level for academic distinction.

He became a Banker and worked with First Bank for 6 years and later African International Bank for four years. He rose to the position of a senior Bank manager before he voluntarily resigned in 1989 to enter full-time ministry. It was while at Ife he met Mama (Rev. Dr. (Mrs.) Anthonia Oyebola Elomobor (nee Adekoya). They later got married on October 16th 1982. Bishop Elomobor, a dual citizen of Nigeria and America was an international preacher with churches in Nigeria, the U.K, Maryland USA etc. He was a friend, pastor and counsellor to Governors, Presidents and many celebrities around the world. Bishop Godwin Elomobor is the presiding Bishop of The New Generation Bible Church in Kano. He was, in fact, rumoured to be the next PFN President. Bishop Elomobor happened to be ordained by the Late Archbishop Benson Idahosa who also mentored Pastor Chris Oyakhilome.

In his lifetime, he had many Spiritual and Biological sons and daughters. Since his death, many of his Pastors and Associates have been writing Tributes in his honour which reveals many sides of the Archbishop. One of it is titled: Good night Bishop Elomobor…You came, you saw and you conquered. Your love for me was out of this world…From the day you called me out by word of knowledge in a meeting saying “I sense you are a man of God” from that day, you loved me till your last breath last night… I can’t forget our visit to many high profile government functions, I remembered how you took me on the same plane to Accra with Rochas Okorocha, Pa Utomi, Musiliu Obanikoro and others to attend The Installation ceremony of Late President Attah Mills. Also, the day Pastor Adeboye RCCG came to preach for you, you made me sit beside Pastor Adeboye. I was in the crowd when you said Bolaji, that is not your place, your place is here and you relocated my seat. Our trip to Thailand in Bangkok was great. You bought me an expensive ticket to fly. The way the Kano Church received me when you sent me there was huge…

You loved me, you believed in me, each time I walk in, in the middle of your sermon you will pause and say let us welcome Bolaji and his family! The honour was real, tangible and heartwarming. You didn’t disdain us like some do because we are young and little. You gave all my friends I brought to you their honour…Papa.I will miss you. My heart breaks into a million pieces. Adieu. My heartfelt condolence to New Gen. Bible Church Worldwide and Mrs Elomobor.

READ ALSO: HOW TINUBU BECAME THE MAIN ISSUE IN POLITICS

Archbishop GODWIN ELEMOBOR Dies In The US was last modified: February 15th, 2022 by City People

How TINUBU Became The Main Issue In Politics