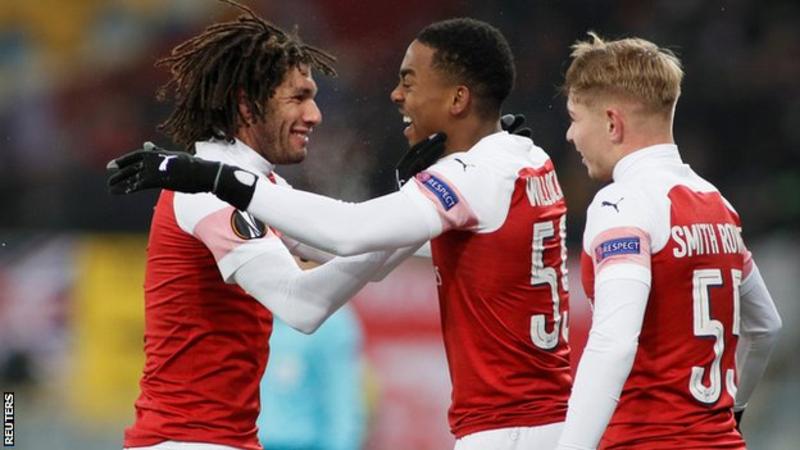 The match had initially been in doubt because of security concerns in Poltava, but Uefa intervened and moved the tie to Ukraine’s capital.

Teenage forward Emile Smith Rowe scored his second goal in as many European starts, before Aaron Ramsey converted his first penalty for the club.

Arsenal will now avoid the four best-placed teams dropping down from the Champions League in the last 32.

Emery decided to promote several youngsters to the first team, after making 10 changes to the side that beat Bournemouth in the Premier League last weekend, with only centre-back Rob Holding retaining his place.

Smith Rowe, 18, and Willock were deployed either side of 19-year-old Eddie Nketiah in a front three, and it did not take long for the academy graduates to make an impact.

Arsenal took the lead in the 10th minute when the ball fell kindly to Smith Rowe inside the area following a deflection from a Vorskla defender.

The talented forward showed poise and composure to tuck the ball into the net, before Ramsey – in his final season for the club – dusted himself off after being bundled over inside the area to roll the ball past Bohdan Shust from the spot.

The Londoners continued to dominate the match, enjoying just under 60% of possession and limiting the hosts to only two shots on target – Petr Cech’s only real involvement in the bitter cold.

Willock added the gloss to an impressive first-half performance minutes before the interval with a finish of which club legend Thierry Henry would have been proud.

After being sprung clear by Mohamed Elneny’s through ball, Willock opened his body to bend the ball into the far corner.

Smith Rowe had the ball in the net for a second time, only for the goal to be disallowed for a dubious offside decision, but victory for the Gunners saw them extend their unbeaten run to 18 matches in all competitions.

Arsenal manager Unai Emery said: “In the first minute they started pushing and they had some action in attacking moments, but we stopped it well and then when we scored the first goal we took confidence and then took control of the game.”

On Emile Smith Rowe’s performance, Emery added: “He is taking confidence, he is taking responsibility and also I think today his performance in 90 minutes is very good. He is a good example for the other young players. We think they can help us but they need the confidence of playing matches, not only working with us in the training sessions.”

‘I Died and Came Back To Life’ – Vanguard Newspaper Editor-In-Chief, Gbenga Adefaye