Home News At 85, There Is No Slowing Down For Prince SAM ADEDOYIN
News

At 85, There Is No Slowing Down For Prince SAM ADEDOYIN 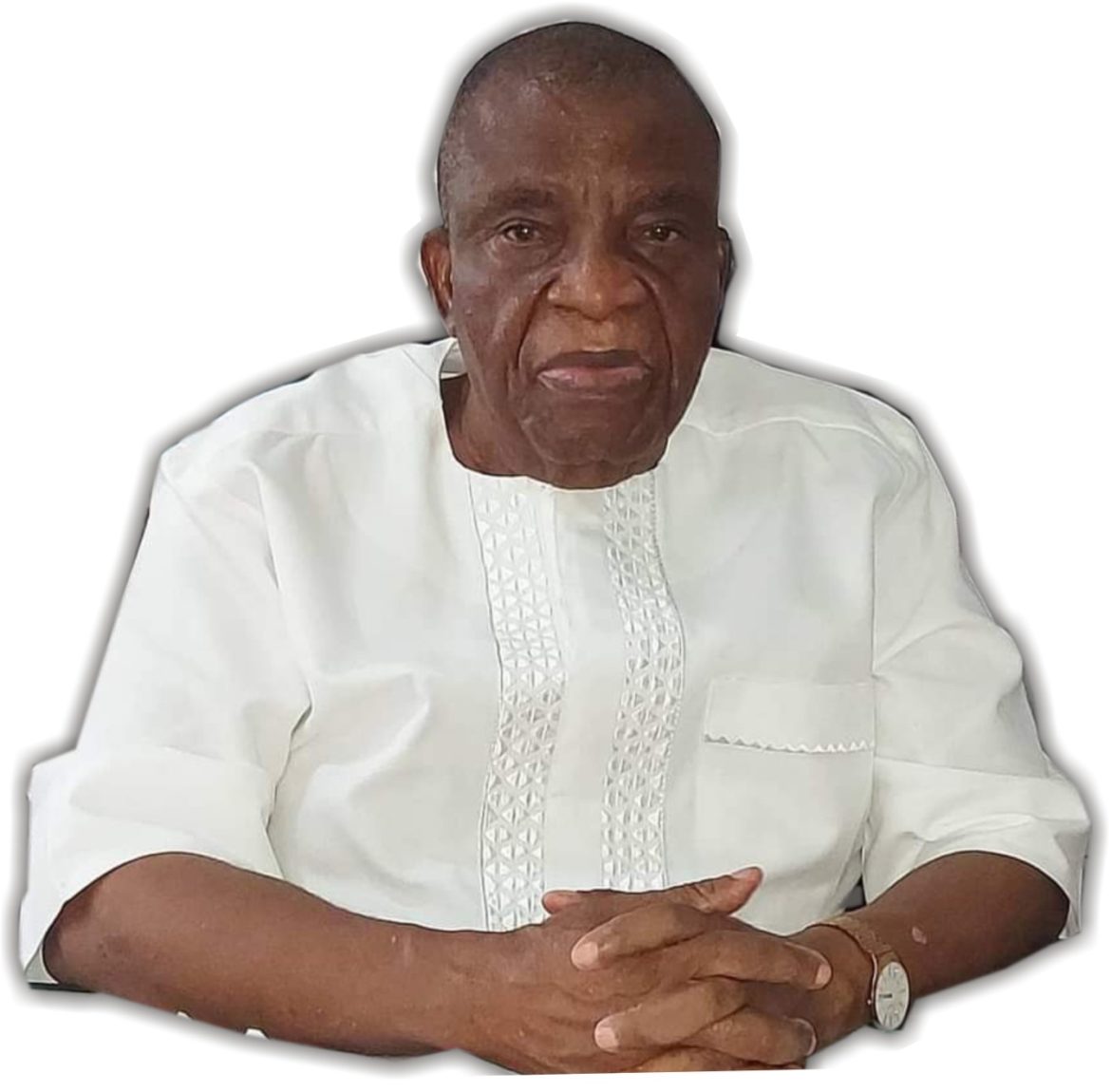 It is a Tuesday afternoon at the head office of Doyin Group in Victoria Island, Lagos and Prince Sam Adedoyin (OFR) the Founder and Chairman of the group is busy with some paperwork at his large and expansive desk, befitting of a manufacturing icon who controls 8 big companies.

He is dressed in a white buba and sokoto and a white designer shoe to match. As he is signing letters he wants to send out, he is also approving numerous requests from his various companies. His aides are also coming in and going out intermittently to see him for confirmations.

His office is roomy and he has 2 big TV screens to the right side of his table with which he monitors local and global news.

After taking a second look at Prince (Dr.) Samuel Adedoyin, you will keep asking yourself if this great industrialist is that far gone in age. He was 85 only a few days ago, but there is nothing to suggest that he is an Octogenarian. He can still pass for 65 or 70, but certainly not 80. He looks refreshingly young and agile. And bubbles with energy and vitality.

How has he been able to achieve all these? This and many more were the questions we wanted to ask him as we went to keep our interview appointment with him.

From the little we saw that Tuesday afternoon, it was obvious that at 85, there is no slowing down for Prince Adedoyin who many describe as a workaholic. One thing all the staff of Doyin Group say is that their Chairman is a workaholic and for you to survive as a top or middle-level manager or just an ordinary staff, Hardwork is key. And you must also be passionate about your job, because the Chairman is committed to the effective running of his conglomerate. He is a hands-on CEO who is on top of his game. He keeps trank of figures and goes through all the reports that land on his table. No wonder Doyin Group has survived all the vicissitudes and vagaries of the Nigerian Economy. He is one of the very few surviving industrialists left on the scene. Others have given up.

When he turned 85, on Sunday 6th December 2020, his plan was just to call in some Pastors for Praise & Worship as he wants to do annually. He felt with the way 2020 went, with all the challenges of the pandemic, he should just celebrate his 85th in a low key at home. But his beautiful wife, children (who are all grown) grandchildren, all came together to spring a surprise party on him. He never knew about their plans. His grandchildren, many of who are successful people just told him not to go out on that day, that they will all be paying him a visit. And he agreed. They went ahead to invite all his close friends and they all honoured this great man. They even went ahead to sew for him, a befitting Agbada, which they presented to him to wear and they invited him to the venue of the part, right behind the house. Baba Adedoyin was touched when he saw his array of grandchildren and friends who have become family members over the years, gathered to celebrate him.

Of course, Alhaji Rasaq Okoya, the Eleganza chairman, his twin brother was there with his beautiful wife, Shade, Justice Oguntade, who also has become like a brother to him made it. Chief Ade Ojo was also there with his wife.

Sir Olu Okeowo came with his wife, Adejoke. Oba Alao and the Alara, Oba Ogunsanwo attended. Many don’t know that Alhaji Lai Mohammed, the Information Minister & Prince Sam Adedoyin are close. They are from the same area in Kwara State.

From the way, Prince Adedoyin smiled all through the birthday it was obvious that the birthday boy was happy. What thrilled him the most was how his children and grandchildren took charge of the party. For him, it was like reaping the fruits of his labour.

Of course, if you were in his shoes would you not be happy? Let’s tell you a bit more about this accomplished businessman who started business at age 12 and has built what he started as a one-man trading company into the manufacturing company it is today, one which has been able to effectively compete with multinational companies.

The truth is that Prince Sam Adedoyin has been a big blessing to Corporate Nigeria because he has fought many battles to open the doors to many small-scale entrepreneurs to go into the manufacturing sector to challenge the multinationals. He has also been a great blessing to his people of Agbamu. He is passionate about them.

Prince (Dr) Samuel Adedoyin is a native of Agbamu in Kwara State. He was born in Lagos in December 1935. He had his early life in the rich and socio-cultural setting of Agbamu.

He is a philanthropist, diligent, intelligent, dynamic, shrewd and innate businessman who combines these rare qualities that differentiate him from his peers in Industry and Commerce.

Prince Adedoyi is an Apostle of Industrialization, Doyen of Industry and a heavy Stock Investor. He is the Executive Chairman of Doyin Investments Limited, a Conglomerate and Foremost Indigenous Group of Companies.

He commenced his business exploits with petty trading, and by God’s grace, prudent management of human and material resources, commitment to excellence and resilience, is today an Industrial giant of our time.

There is also Doyin Farms Limited, which is into Ginger, Cashew, Sesame seeds, Cassava tuber,

There is Starco Limited, which is into Real Estate Developers, Distribution of PMS (Fuel) and AGO.

Significantly, the Prince in his backward integration efforts, and to satisfy his raw materials need as well as service to other industries, has a Ginger, Sesame seeds, Tomato, Pepper, Cassava, Corn, Cashew, Coconut and Palm Tree Plantation in AGBAMU, Kwara State for the production of Cassava Starch, Corn Starch and Oil Palm.

Doyin Farms has positively contributed to the growth, development and empowerment of the community and its surrounding towns in its area of farming operations through their improved standard of living. This is made possible by adopting the latest methods of farming, that is, Green House, enabling all-year-round farming.

The final products of these companies are sold to Supermarkets, Shopping Malls, for example, Shoprite, local markets, among others.

These companies, apart from effectively playing their role as good and responsible corporate citizens also earned many awards and honors from several organizations, bodies and Government agencies for their quality products. It also fulfills Prince Adedoyin’s resolve to exhibit our prowess in the areas of

Science, Engineering, Accounting, Banking and finance, Pharmacy, Building, Architecture, Surveying, Nursing, etc. This is better demonstrated in that as at today, Doyin Investments Nigeria Limited is a wholly-owned Nigerian company with no single expatriate staff, inclusive of its Management and Directorship.

In fact, the daily operational activities of all the companies positively impact on the citizenry greatly such that the brand name “DOYIN” is a household name for quality products in Nigeria.

In answer to standard Hospitality business establishments, Prince Adedoyin has provided hotels of international standard in Abuja and Lagos creating employment opportunities for the teeming masses and recreation.

As a Philanthropist and Industrialist, his contributions to mankind is numerous and this is recognized and appreciated globally with several ‘Awards’ and ‘Honors’ conferred on him by various associations,

professional bodies and government Agencies. These amongst others include Freedom of the city of London Award by the Lord Mayor of London – 1990.

He strongly believes in the industrialization of Nigeria, which he says if well pursued will lead to our economic emancipation. His contributions to the development, growth and improvement is summarized thus – the industry and community services. These are briefly described below:

(2) CONTRIBUTION TO NATIONAL GROWTH & THE INDUSTRY

• Economic empowerment of the teeming masses through the appointment of Distributors, Suppliers, etc. for its various services, products and the Oil & Gas business; • Building of Green Farm House at Agbamu on over 1,000 hectares of land;

The National Growth: • Generation and provision of direct employment for over 2,500 Nigerians.

A devoted Christian, he is happily married with children and grandchildren.

At 85, There Is No Slowing Down For Prince SAM ADEDOYIN was last modified: December 15th, 2020 by Seye Kehinde