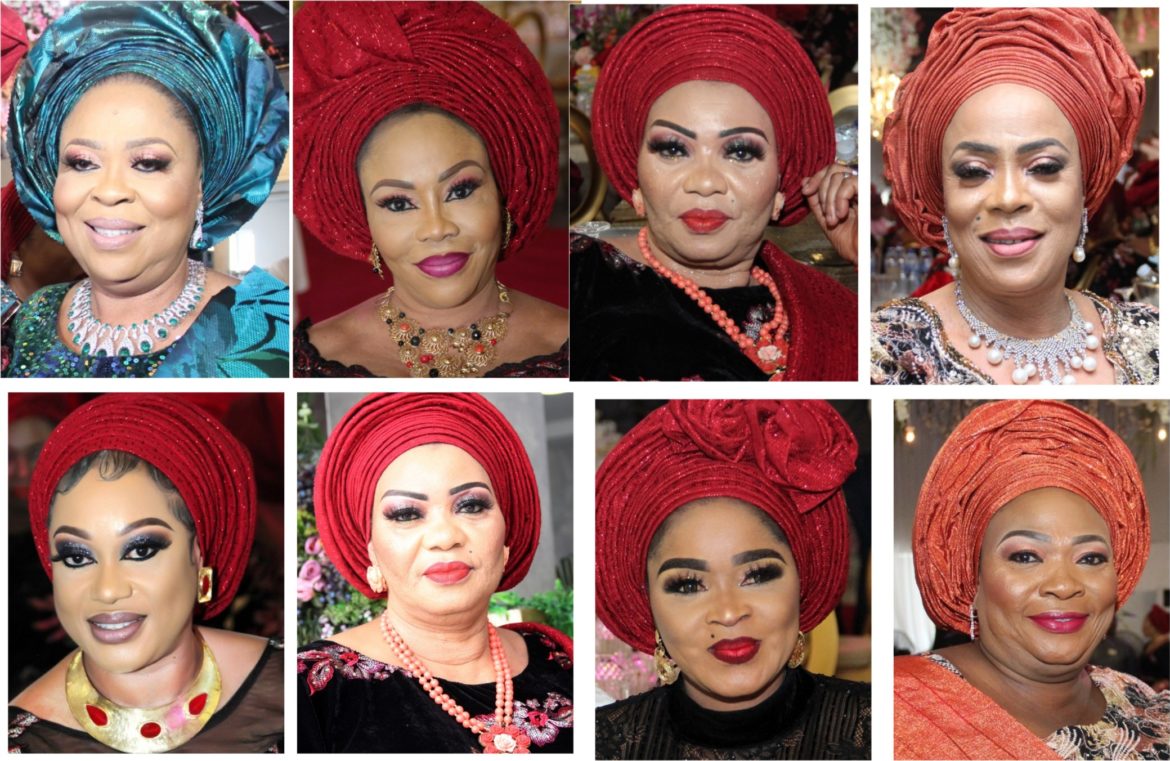 •How About 1,000 Celebrity Women Made Style Statements

The whole of socio and business circle was shaken to the foundation for 2-days as a Diamond merchant, Otunba Risikiyat Adunni Afolasade Adesoye, Nigeria’s most prominent society matriarch threw a classy wedding for a daughter, Mayomi Ogedegbe, as she got married to her long time beau, Eyinimofe Gbadamosi, in grand style.

Over one thousand beautiful women of style and finesse graced the 2-days wedding, which kicked off Thursday 11th of March with a talk-of-town Mothers Night while Saturday 14th of March was the traditional engagement.

Of course, many celebrities didn‘t expect anything less of a high standard on display as the bride’s mum, Otunba Folasade  Risikiyat Adunni Adesoye, is one of the most celebrated society women in Nigeria. Her jewellery store, Jewellery Affairs, is the choice of the rich and mighty in Nigeria and she has both social and business influence at her beck and call. She is a mentor to many rich Nigerian ladies and a proud industrious daughter of Ijebuland.  She is from the popular “Asotemaru and Araga-Sosanya family of Ijebu-Ode and she is married to an Awujale  High Chief  Otunba Adegboyega Babatunde Adesoye, who is also from a royal family in Ijebuland.

As a jeweller of many prominent Nigerian men and women of style, she has come to win the love and admiration of most society ladies, who patronize her. Beyond her good sense of business style, Risikiyat Adunni as she is fondly called is also an embodiment of humility, grace and warmth.

This is one of the many reasons many celebrities honoured her invitation. It was as if many of the society women deliberately made it a point of duty to grace the Mother’s Night and the grand engagement. Why won’t they look their best? The celebrator’s mum herself is a fashion pacesetter. She sets the pace for others to follow. She is also known to stand out at any occasion she attends. She was one of the best dressed at her daughter, Mayomi’s wedding. Her first outing for the Mother’s Night was a red and touch of torques luxury Ankara matched with a timeless diamond. She didn’t steal the show alone, so also was the mother of the groom, Deaconess Gbadamosi. She was the cynosure of eyes too in the same attire with Otunba Risikiyat Adunni.  One could have mistaken the Celebrity Mums for friends as they showed love and respect to each other to the admiration of many.

As many admired the look of the couple’s parents at the Mothers Night, they were equally objects of admiration during the traditional Engagement as both mothers stole the show in emerald Green all sequenced luxury lace matched with Emerald Greenshoe. The silver and emerald stones diamond which complemented Mrs Adesoye’s attire were show stoppers any day. The two mothers-in-law were filled with joy as both danced out with their friends.

What about the bride Mayomis look? Her 3 outfits for her day made many guests turn 360 degrees to catch a glimpse of her. What do you expect of a daughter of Nigeria’s most fashionable Gold and diamond merchant? She spotted a peach colour Special Aso oke from Deola Seago. Her diamond was of a rare colour, which sat well on her neck dazzling all day. Her 2nd outing was a monotone sky blue lace matched with a sago headgear. She frilled her attire with silver and sky blue diamond. What about Mayomi’s 3rd display? It was an emerald green lace matched with emerald green multicoloured diamond. Her melanin skin was by Nigeria’s number 1 makeup artist, Banke Meshida. There was no doubt that Mayomi stole the show at her wedding.

Being fashionable runs in the Araga Sosanya family as Alhaja Idiat Alli Balogun, the wife of Lagos Prince and Real Estate Guru, Otunba Dapo Alli Balogun stole the show. She is the elder sister of the bride’s mum.

Another society woman who made a fashion statement was Hajia Ameenah Fowosere aka “Obaby”. She is known to be very fashionable. She is the wife of a paper merchant, Otunba Laide Fowosere. So also is Oloori Sekinat Aramide, the wife of Oba Saheed Ademola Elegushi and of course, Mrs Jumoke Oyeneyin, the CEO of Jimmy Exclusive Fabrics.

Have we told you about Hajia Morufat Shabi? The brain behind Morkal Fabrics doesn’t settle for less when it comes to standing out at parties. She spotted twenty-six avenue collections, a fashion line by her daughter, IDERAO. Let’s gist you about Mrs. Bimbo Pitan, the shoe merchant’s look. Her fabric was fully transformed to fit her curvy shape. So, also is Hajia Adejoke Ogedegbe, the wife of Ogun Politician, HON Azeez Ogedegbe. She stood out with her sister-in-law.

These Society Matriarchs are known to be very active on Lagos social scene and they still make fashion statements. One of them is Hajia Abbah Folawiyo, Hajia Bola Shagaya and Mrs. Ireti Asemota. They looked many times younger than their age at the wedding and their aunty, Olori Risikat Iyabode Adam too.

Prof Amudalat Bolanle Olaniyan and Justice IYABO Yerima are 2 celebrity friends who love to party together. Prof Olaniyan, the wife of Oyo Deputy Governor, may look simple in iro and buba, but she surely stands-out.

Another Celebrity woman, who stood out at #momayo2020 was Mrs. Peju Muraino, who didn’t look 60. She was a cynosure in a flowing gown as she enjoyed the party with her daughter, Mrs Yemisi Onabamiro and her best friend of over 30years, Mrs Mopelola Sobowale.

Do you know Alhaja Bola Ologburo of Lace and Fabrics in Ibadan left Ibadan for Mayomis wedding? She enjoyed the engagement throughout just as the De root Aso oke sisters, Mrs. Olabisi Balogun, Mrs Oluwatoyin Ayanbadejo and Alhaja Bola Muse.

Do you know Cynthia Andrew is back on Lagos social scene and she is bigger and better? She is a popular designer and an entrepreneur of class.

These celebs are young in their 40s and they made heads turn at events. One of them is Mrs. Titilayo Chinedu. Though dressed in iro and buba but her choice of 18carat gold complimented her attire. She enjoyed the party with Mrs. Yetunde Balogun, Nickkycoverings, Busola Akeredolu, Mojisola Osuoka, Foluke Aderemi (Newyork), Yinka Lanotade(Newyork), Mrs Hamzat Bolatito, Mrs Deola, Gabi and others.

What about celebrity Friends who party together? We are taking about Mrs. Bisi Abiola and Mrs. Tinuke Saro? Their friendship dates back to 40 years and still counting. Erelu Folany Animashaun, Yeye Temitope Saranda. Mrs. Bola Ogedegbe, Cheif Mrs Funmi Ogedengbe, Mrs. Funmilayo Jolayemi, Lady Ronke Ibisunwa, Hon. Ramota Oniba and many others were not left out.

READ ALSO: HOW WE MADE TINUBU LAGOS GOVERNOR IN 1999 – THE GRAND OLD MAN OF POLITICS, CHIEF AYO ADEBANJO

How We Made TINUBU LAGOS Governor In 1999 – The Grand Old Man Of Politics, Chief AYO ADEBANJO

New Ways To Avoid CORONAVIRUS Disease – The Rules To Obey