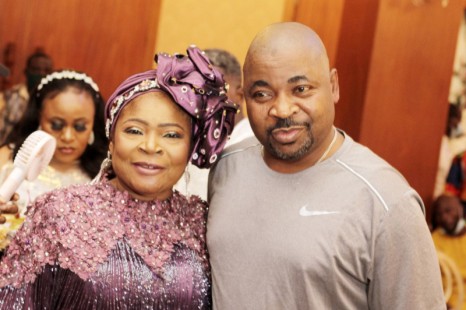 •How Her Children Played A Fast One On Her

On Sunday, 24th of October, 2021, all roads led to Oriental Hotel in Lekki for the surprise birthday celebration of the popular Queen of Waka music, Salawa Abeni. As it was a secret affair, Elizabeth Walker and her team beautified the hall with large portraits of the Queen that were later covered with dark drapes. The children of the Queen, Aminat Okikiola Aderayo, Sikirulahi Akanni Ilori and Atanda Ayinla took their time to walk guests into the hall.

Madam Kofo and Gbenga Adeyinka, the first entertained the guests and introduced artistes, one after the other. Alhaji  Atawewe took the stage to sing after which Dj Jam also had time to thrill the guests. The Salt Of The Earth Band enthralled guests with its music. Surprisingly,  a voice that was not identified sang a song from Queen Salawa Abeni’s album which kept guests guessing.

At that point, guests immediately formed a circle round the stage as they wondered about the voice behind the stage. Some moments after, Queen Salawa Abeni herself walked on stage to a big applause from guests. These are gists from the party.

The Ballroom Hall at Oriental Hotel located in Lekki, Lagos State was the venue for the grand all-white party. On display were large and beautiful portraits of the Queen, decorated with drapes and balloons. The hall also boasted of a well-decorated stage with beautiful chandeliers. The tables were covered in beautiful white cloths and surrounded with crystal chivalry chairs. This gave the hall an aura befitting a grand party.

Queen Salawa Abeni’s first entrance attracted a big wow, as she came in dressed in a well detailed white chiffon gown. As usual, she had a beautiful white turban to match. The turban had gold frills sewn into it as she spotted a pair of comfortable silver slippers. For her second appearance, Queen Salawa Abeni was in a flowing silk purple gown, with well-stoned purple lace designs on the nape. She also capped it with a purple turban which had a mix of elegant colours.

THE UNVEILING OF THE SURPRISE

As guests sat in expectation of Queen Salawa Abeni, her popular Gentle Lady song was played from an anonymous source behind the stage. As this was playing, Queen Salawa Abeni was ushered into the hall. She was surprised as a loud cheer from family members and friends greeted her. She became teary as she was taken aback by the love displayed by her friends, family,  and colleagues.

THE ROLE OF AMINAT OKIKIOLA ADERAYO

Aminat Okikiola Aderayo, the only daughter of Queen Salawa Abeni, had all vendors running to her for instructions and guidance as she was up and doing during the event. All preparations went through her as she ensured that guests were well taken care of and recognized. She did a great job keeping the surprise, a secret, as she kept the door shut out to Queen Salawa Abeni’s entrance.

As expected at such a party, different artistes came to honour the Queen of “WAKA’’ music. Demeji Ayoka and his band were first to take the stage as they got the guests dancing. The Salt Of The Earth Band also took the stage after Demeji Ayoka. Alhaji Atawewe, Ajobiewe, and Queen Ayo Balogun followed in that order.

Madam Kofo and Gbenga Adeyinka, the first maintained order at the event. They also did a great job amusing guests as they attracted guests’ attention at different intervals. The duo was a great match.

For a well-planned surprise party, the children of Queen Salawa Abeni invited a class of guests that surprised their mother. The presence of Rev. Ajayi Esther, Sir Shina Peters, Lagos State NURTW Chairman, MC Olu-Omo, Kofi, The Comedian, Oba Salisu Adedoyin, Chief Akinbode and many others added class to the event.

As the event went on, an anonymous guest handed over keys to a 2019 Nissan Rouge Salon car to Queen Salawa Abeni while she was on the dance floor. She lost her balance as friends rallied round to revive her. The Queen was not expecting such a big surprise!

The event did not only pull Juju music artistes and Lagos socialites. Actors and actresses were also at the party. They include Iyabo Ojo, Fausat Balogun a.k.a Madam Saje, Tobi Bakare, among others.

How I Found Joy In Making Shoes...