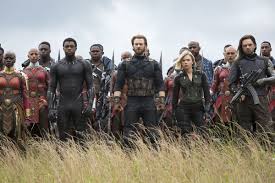 Avengers Infinity War continues to gross huge amounts at the box-office, quickly becoming the highest-grossing movie of the year.

Now, the Marvel blockbuster has become only the fourth movie to ever cross the $2 billion mark, with eyes now on becoming the third highest-grossing movie of all time.

The superhero smash-up needs to take another $7 million to match Star Wars: The Force Awakens, which took $2.07 billion back in 2015.

Ahead of the two Disney-produced properties are two James Cameron-directed blockbusters, Titanic ($2.19 billion) and Avatar($2.79 billion).

The majority of Infinity War’s gross has come from the United States, Americans shilling out $656.1 million. The movie has so-far failed to defeat Black Panther at the domestic box-office, the Ryan Coogler-directed flick having earnt $699 million.