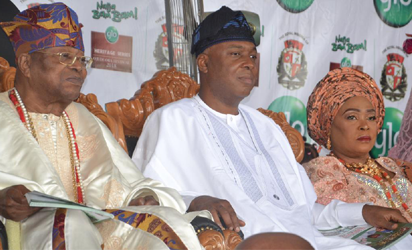 Awujale and paramount ruler of Ijebuland, Oba Sikiru Adetona, Thursday, threatened to rain curses on politicians and their supporters who play politics at the venue of Ojude-Oba festival.

This was after small group of people among the crowd, began chanting the slogan of the All Progressives Congress, APC, at the venue of the event, while the Senate President, Bukola Saraki was giving his speech at the Ojude Oba festival.

The small group of people wielded brooms, which is the symbol of APC at the venue

The monarch, who was visibly angry with the politically motivated action threatened to change his annual royal blessings to curses if such an action was repeated.

“Ojude Oba is about culture and tradition. It is non-political. It has been like that since our forefathers started it. It is an abomination for anyone to drag politics into it.

“I want to appeal that such act should not repeat itself here. If those who hired you are bold enough, they should show their faces.”

No Date Released For Primaries Yet – APC