Home Sports Bakayoko Checks in for Medicals at Chelsea After Dinner with New Team-mates, Luiz and Willian (Photos)
Sports 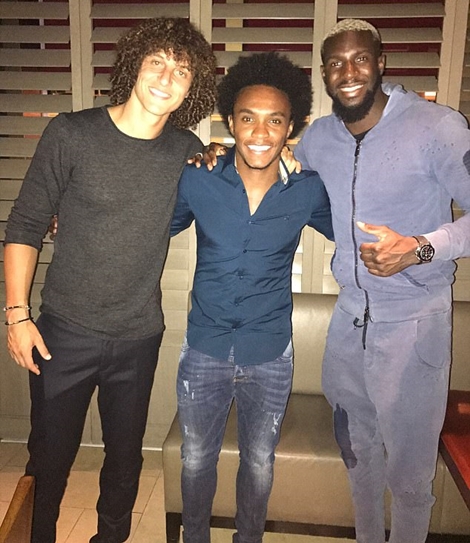 Tiemoue Bakayoko was given a warm welcome by some of his new Chelsea team-mates on Thursday night as he headed out for dinner with David Luiz and Willian, Dailymail UK reports.
The Brazilian pair gave Chelsea’s imminent signing a taste of the London life as they dined with him at the plush Jinjuu Mayfair, before heading to nearby Novikov. Monaco midfielder, Bakayoko has all-but confirmed his move to Stamford Bridge, with the club set to officially announce the deal in the next 24 hours.
The Frenchman was at Cobham to have his medical on Friday, and the Premier League champions will pay £40million plus add-ons for the 22-year-old. Bakayoko shared a picture on his Instagram Stories looking out at the training pitch, has followed the club and several of the players on Twitter.
Jose Mourinho’s side were also heavily linked with a move for the player, but he has opted to move to London with Chelsea instead.
Bakayoko Checks in for Medicals at Chelsea After Dinner with New Team-mates, Luiz and Willian (Photos) was last modified: July 14th, 2017 by Arinze Ago

EU to partner NYSC to end irregular migration of Nigerians