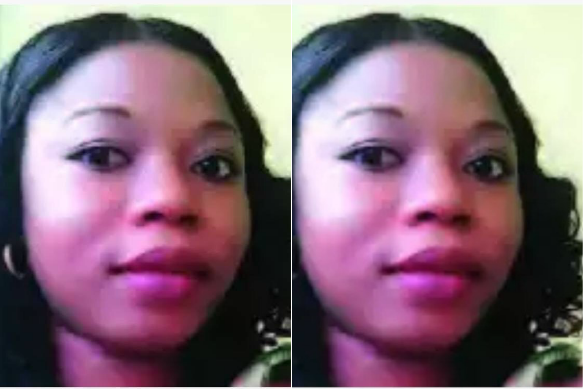 A banker, who only gave his name as Kingsley, has lamented the loss of his newly wedded wife, Adaoma, to gunmen suspected to be kidnappers.

According to Punch, Adaoma and her husband were abducted on June 11, 2017 while on their way back to Port Harcourt, the Rivers State capital, from Ekpoma, Esan-West in Edo State.

The deceased and her husband wedded on April 29, 2017 in Port Harcourt.

Narrating how they were accosted by heavily armed kidnappers around Rumuoji in Emohua LGA of Rivers State, husband to the deceased, who insisted that his name should not be mentioned, explained that he tried to escape from the kidnappers with the reverse gear immediately they came out of the bush.

“When they saw that I was making an attempt to escape, they began to shoot at the bonnet sporadically and the engine of my car stopped immediately. They came and dragged us out of the car and moved us into the bush.

“The kidnappers were in two groups; one of the groups took my wife to one direction while the other took me to another direction. We were attacked and taken away at about 3.40pm. I was asking them (kidnappers) about my wife’s whereabouts and they assured me that she was with the other group.

“By the time I saw my wife, she had collapsed and her face was swollen. I became afraid and begged them that they should release us so that I could take her to the hospital. They gave me the beating of my life. That was about 8pm.

“When I continued to beg them, they allowed me to call a friend of mine (James) to drive down to the main road that night to pick my wife and rush her to the hospital. The kidnappers ordered me to carry her to the road while they followed me.

“The entire place was dark and I carried my wife and tried to wait and have a rest, the kidnappers would again begin to beat me. This continued until we got to the road. I was told to lay my unconscious wife by the side of the highway with some leaves used to surround her for easy identification.

“They immediately marched me back to the bush. My friend, who knew that we were kidnapped, travelled from Port Harcourt that night to the point where my unconscious wife was dropped. He eventually took her to the hospital, where she was confirmed dead,” the devastated Kingsley added.

The husband, who was eventually released by the hoodlums around midnight, said that he was still shocked that Adaoma, who he married five weeks earlier, was killed by kidnappers.

Describing her as an easy-going, God-fearing person and a devout Christian, the husband explained that he was beaten to a pulp after the kidnappers spoke with his pastor, adding that his pastor had cursed them for abducting me and my wife.

“They gave me another round of beating when my pastor spoke with them through my phone and cursed them. My wife must have been punched in the face or hit several times with the butt of a gun. They were dragging her along the bush. That might have caused her to collapse and died,” he said amid tears.

He explained that he had been traumatised by his experience in the bush and felt that the kidnappers could still waylay him again.

However, the State Police Public Relations Officer, Mr. Nnamdi Omoni, said he was not aware of the incident and promised to reach the Divisional Police Officer in charge of Emohua, where the incident happened.