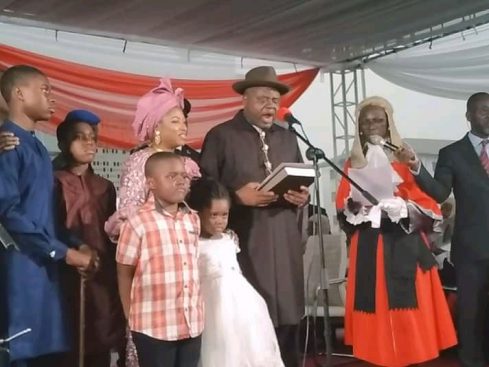 Bayelsa’s new governor, Douye Diri, in his inaugural speech, asked the people of the state to think of the peace and prosperity of their fellow brothers and sisters, irrespective of political affiliation.

Mr Diri was sworn in Friday as the fifth governor of the oil-rich state, amidst a violent protest in the state capital, Yenagoa, and other parts of the state, by aggrieved supporters of the All Progressives Congress (APC).

The police on Friday declared a three-day curfew to forestall a breakdown of law and order.

The APC candidate, David Lyon, who won the November 2019 governorship election in the state, was sacked Thursday by the Supreme Court because his running mate, Biobarakuma Degi-Eremienyo, presented false information to the Independent National Electoral Commission (INEC) in aid of his qualification for the election.

Mr Diri was the candidate of the Peoples Democratic Party (PDP). Having scored the second highest votes in the election, he was declared governor-elect Friday by INEC, in compliance with the Supreme Court ruling.

“Today, we have been sworn in as PDP, my advice to all of us is that we have to be magnanimous in victory,” Mr Diri said in his inaugural speech before a crowd of supporters.

The Government House was the venue of the inaugural ceremony. The Samson Siasia Stadium, which was earlier slated for the swearing-in of Mr Lyon, was jettisoned after the Supreme Court judgement.

Mr Diri spoke extempore, with his wife and four children standing by his side.

There were hitches as the organisers struggled to get the ceremony to go on. They did not plan and rehearse for it apparently because of the circumstances that threw up the event. Voices from the crowd intermittently interrupted Mr Diri’s speech.

The governor continued, “Today is 14 of February, a day of love. As a valentine governor and deputy governor, we bring the message of love to Bayelsa State.”

The crowd clapped and cheered him on.

“Primarily, we are brothers and sisters from Bayelsa State. And our creed today is to serve you.”

A minute silence, following the governor’s request, was observed for people killed last year in Nembe at a PDP rally.

The governor ended his speech by reading out a famous prayer by a Catholic friar, St. Francis of Assisi, which he called “our creed”.

“Lord make us an instrument of thy peace. Where there is hatred, let me show love, let us show love.