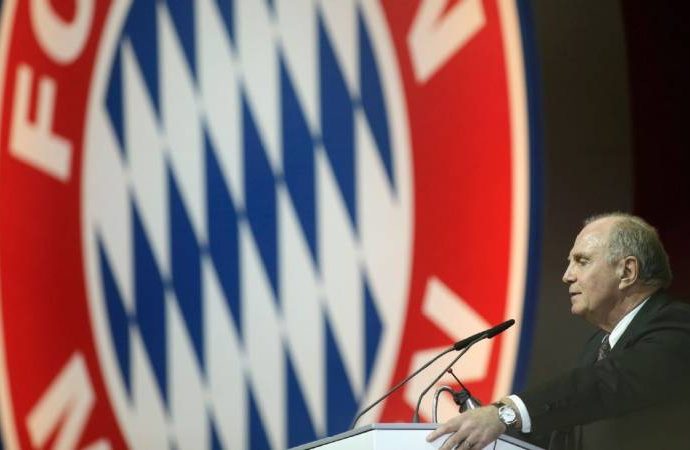 Bayern Munich president Uli Hoeness feels it is an admission of failure for a club to spend big in the transfer market, as Paris Saint-Germain continue to be linked with an extraordinary €222million swoop to sign Neymar from Barcelona.

The Ligue 1 giants have been heavily tipped to smash the world transfer record by meeting the enormous release clause in the Brazil international’s contract, although Barca defender Gerard Pique suggested, via a Tweet on Sunday, that the 25-year-old has been convinced to remain at Camp Nou.

Addressing the media upon Bayern’s arrival in Singapore for their next International Champions Cup pre-season fixture against Chelsea, Hoeness took aim at the largesse of some rivals.

“This is rather a sign of weakness,” he said of the outlays being made across Europe.

“If I have to spend a lot of money to achieve nothing, it is more of a sign that I have not worked so well before. And that’s why I cannot be so interested.

“Not the most expensive transfer is the best, but the one who does the most.

Bayern parted with a Bundesliga record fee of €41.5million to capture Corentin Tolisso from Lyon and brought in Niklas Sule from Hoffenheim for a reported €20m.

But they have also snared potential bargains in the form of Serge Gnabry, a cut-price arrival from Werder Bremen, James Rodriguez, signed on loan from Real Madrid, and free transfer Sebastian Rudy, as the team prepares to try and secure a sixth successive Bundesliga title.

RB Leipzig sprung a surprise to finish second to Bayern last season, but Hoeness expects a more predictable rival to vie for the championship in 2017-18.

“Leipzig will play a good season again, but the first challenger will surely be Borussia Dortmund,” he said.

Bayern were without a sporting director in coach Carlo Ancelotti’s first campaign in charge last term, after failing to replace Matthias Sammer, who stepped down in July 2016.

According to Hoeness, though, they are now close to making an appointment.

“We will announce a sporting director within the next six weeks,” he said.

“I’ve already said that [executive chairman] Karl-Heinz Rummenigge and I have been looking around, and there have been some talks taking place.”