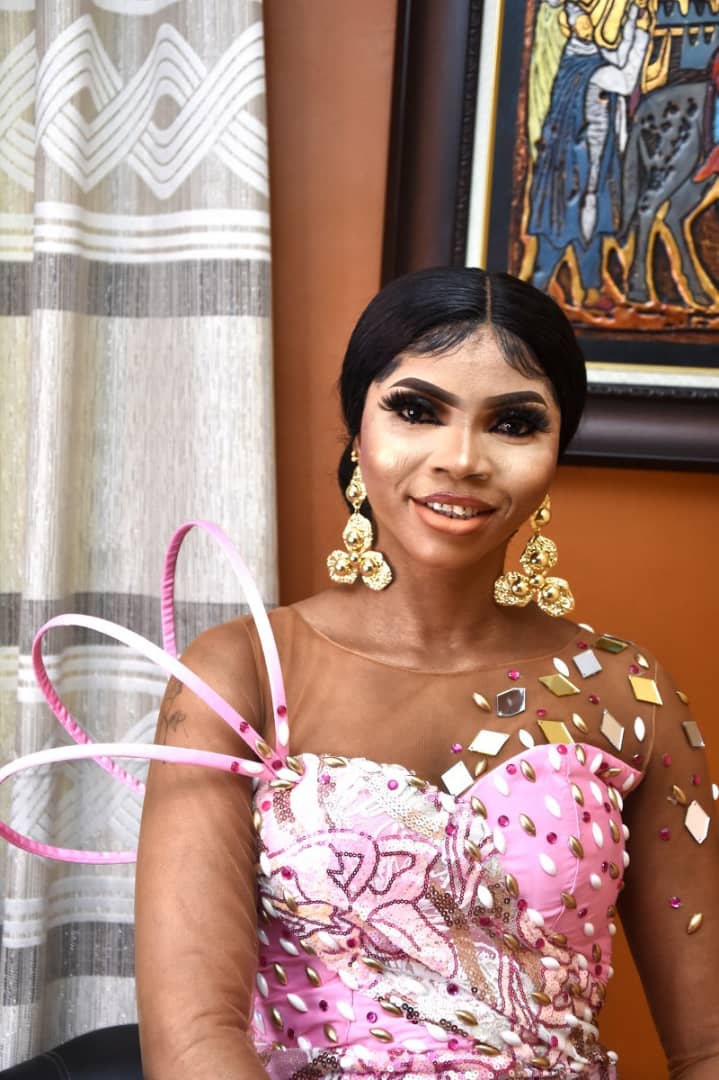 On Friday 20th May, 2022, popular international trader, Adijat Abolore Abike Odunaya celebrated her grand entry into the 4th floor with family and friends. She also took the date to celebrate her son Bright Odunaya,who also clocked 10 years.
The event started with the preparation at Bisto Hotel in Ikorodu,Lagos. Filled with joy, Adijat sat pretty, as Vicky Makeover and Beads adorned her with beautiful makeup.
As this went on, De Kings Hotel which is also located in Ikorodu, Lagos was expertly decorated by Party Sparkles and her team.

The entrance had beautiful backdrops of the celebrant at strategic places. The hall itself was lavishly decorated with drapes and props, with hints of pink and gold. The stage was beautifully set for the celebrant with 2 cakes.

At Bisto Hotel,Adijat popped into various beautiful outfits, like a nude net sequence lace dress, 3 will embroidered pink lush laces of different styles, as she posed for the cameras on standby.

As this went on, guests arrived in their numbers,with the women dressed in pink lush lace of different patterns,with pink gele to match, while her Egbe Bobagunwa stood out in their pink lush lace, with the popular burgundy colored customised gele to match.
The men were not left out ,as they turned up in white or brown senator materials and burgundy colored caps to match.

At the sight of the celebrant, popular Fuji musician, Dare Melody and his band immediately swung into action.
The celebrant danced in alongside her husband, Oluwaseyi Odunaya and son.
After taking her seat on the stage alongside her son, the members of Egbe Bobagunwa quickly presented their gifts to the celebrant, who is also a key member of the Egbe Bobagunwa.
As this went on, De Dollar took the stage to entertain guests, as he sang danceable hip-hop music. After this, Mc Bam and Portable managed the ceremony. They recognised the presence of important guests like Alhaja Mopelola the Iyalode Bobagunwa, Lawyer Batula, Alhaji Bello, Mr Jide from the United Kingdom, Mr and Mrs Mazi AKA IK, Mrs Ogunniyi and many other.
After this, the MC also engaged Bright on a open dance floor with the help of Dj Rayce.
After this, Alaga Portable was called on stage to eulogie the celebrant. After this, Adijat again went in to change into another attire.
This time around,she danced in, alongside friends, dressed in mint green iro and buba with pink gele to match. As soon as she got to the stage she was ushered towards her cake alongside Bright.
After this, the celebrant again went in to change into her party outfit as the dance floor was made open to everyone.