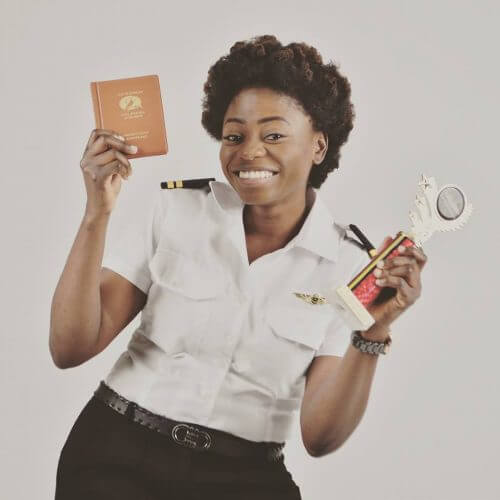 This amiable academic, Olamide Oyindamola Akinfolarin, eminently belongs to a class of achievers. Apart from being a leading light in her aviation domain, she has also served as a mentor and role model to many young female aviators, encouraging students and young women to take up the challenge of going into the aviation sector. In the aviation world, she is a force to reckon with. Even in the face of the separation between her parents, she was able to make use of her strong will, courage and uncommon determination to succeed and achieve her dream to become a pilot at the age of 29. \

Though, both parents played prominent roles in her life but her mother had been a great influence in her life as she ensured that her dream of becoming a pilot comes to reality after studying law.

The two are her choices. On the 4th of March, 2018, Ms Olamide Akinfolarin was honoured with the Ondo State female role model award by Hero magazine and No woman, No nation organization. City People’s Adeola Shittu was at the event where she engaged this young woman of substance who is humble and down to earth and the first female pilot, who hails from Ondo State, as she speaks on her life. Excerpts.

Let me start by congratulating you on your Ondo State Female Role Model Award, who is Ms Olamide Akinfolarin?

Thank you very much, to be succinct, Olamide Oyindamola Akinfolarin is a simple girl who has big dreams with an aim of making positive change in Nigeria as a whole. I was born on July 14th, 1988 to the family of Mr. Collins Funsho and Mrs Gladys Nwabuaku Akinfolarin from Ondo town in Ondo State.

Though, I’m from Ondo town (City) in Ondo State, but I was born and bred in Lagos State, I attended Fountain Nursery & Primary School, Surulere Lagos, I had my secondary school education at Federal Government Girls’ College, Sagamu, Ogun State and I proceeded to University of Benin, Edo state where I graduated with a 2nd Class Upper from the Faculty of Law and I attended the Law School in Abuja. I did my youth service scheme in Abuja and I was retained at the company where I served for about two years before leaving for South Africa to begin my aviation journey.

I’m currently working on acquiring my commercial pilot licence and also am doing my masters, LLM in International Air, Space and Telecommunications Law at University of Pretoria, South Africa to merge both fields of Law and Aviation.

What is the experience like growing up as the only child?

The myth that an only child is spoilt rotten definitely didn’t apply in my case. I was brought up with a firm hand and in a disciplined home. There was no room for misconduct or any other form of misbehaviour. So I grew up like every other person with lots of fun.

What motivated your choice of career?
Right from the out set, I had passion for Aviation, which had always been my first love, before I went to study Law and that was one of the reasons during my final year project at the University as a law student, I centered my project on the “Fly Nigeria Bill”. You see, while I was growing up, my world could be related to that of a little girl with big dreams, but no idea of how they would come to reality.

But right inside me, I knew I was going to be a pilot. You see, my aviation dream dates back to the days of my sheer fascination of aircrafts and the whole engineering behind it. I always wanted to be in control of such a powerful machine. But I was unfortunately, ill informed on the requirements for pursuing aviation course and it slowly took the back seat while I pursued my Law degree, which I do not regret for one second.

Did you feel you would achieve more being a pilot than being a lawyer?
Well, if I had pursued a career as a pilot rather than as a lawyer, I would definitely be way ahead in my career by now. But I don’t for one second regret pursuing Law first. It might not have been my first love, but I also grew to love it. I’ve always believed in the importance of education and I’m eternally grateful to my mother for making me a graduate from a university before going to aviation school. My experience as a lawyer has made me grow and mature in a special way, and I still intend to acquire an LLM in Aviation Law in order to merge both fields of study and make it one. My goal is to, one day, be in a position to make great changes in the aviation sector through, for example, implementation of laws. And my law degree will go a long way in helping me to achieve that.

You are a lawyer and at the same time a pilot, how do you manage these two professions, in a way that one is not adversely affecting the other?
Hmmmm! Yes, I am and I will say it has been God all the way. One of the reasons I’m glad I studied Law in the first place is that, it cuts across all facets of life. And I will also say, Law complements my aviation career and creates no such conflict as may be presumed. So, right now, I’m working on my LLM in International Air, Space and Telecommunications Law at University of Pretoria South Africa, in order to merge both fields of my professions just as I told you earlier. I intend to play a vital role in the aviation industry in the near future. So, I will say I’m equipping myself with the tools to properly serve my country.

Before you decided to become a pilot and lawyer, there must have been someone who influenced you towards both careers?
Honestly, I didn’t’t have anyone I looked up to because I still don’t know anyone, who is both a lawyer and a pilot. However, in terms of leadership, I look up to Ellen Sirleaf Johnson, Africa’s first female president.

Who are your role models?
As mentioned before Ellen Sirleaf Johnson, Liberian immediate past president is my role model. She is everything I strive to be in life. She is highly educated and broke a barrier, which before seemed impossible. “if your dreams don’t scare you, they are not big enough” a quote from her, which I constantly live by till this day.

I intend to continue to bring more pride to the sunshine state. This award has challenged me to do more. I believe in the importance of education, and I will say I’m ever willing to contribute my best to the society particularly the womenfolk and, in a way, I have become a passionate advocate of women’s rights to food security, knowledge and access to education and have developed a strong commitment to women’s empowerment especially in my country. I will also thank the organisers for finding me worthy for this honour.

What was the experience like when you first flew an airplane?
It was all I ever dreamt of and more. It exceeded all my expectations and I felt a sense of fulfillment as I never felt before. You see, flying as pilot-in-command for the first time was exhilarating, to say the least. So, I will say it met and surpassed my expectations.

As a young pretty lady, how were you able to cope among male colleagues?
Wow! Thanks for the compliments. Well, looking young and being a woman always puts me at a disadvantage, particularly in such a male-dominated profession. But, however, that does not slow me down or intimidate me. Rather, it fuels the motivation I need to prove my worth.

I went to South Africa with no formal or informal aviation background, but I was able to excel exceedingly in both theoretical and practical exercise aspects of aviation. My performances in exams were way above average, and I finished my practical in a record time. I was also awarded the Best Private Pilot Progress Trophy. So, I dare say I earned their respect.

You see, I have this strong will, courage and uncommon determination to succeed. And I was able to achieve this through the grace of God and today I command my respect from them. Again, despite the new environment, climate and male dominated path, I emerged the first female pilot from Ondo State. How else do I need to prove my passion for the aviation sector.?I intend to play a key role in revamping the aviation sector in Nigeria in the near future. I have acquired my private pilot license and very soon I will be getting my commercial pilot license which I’m working on.

Going by your profession, will you say you are a fashionable person?
You see, my profession isn’t directly involved with fashion, but I dare to say that even in my uniforms, which are quite stylish on me, you will notice my fashionability. Notwithstanding, I will say I love fashion and when I’m not in uniform, I love to look nice and I’m a pretty girl when out of my uniform.

You are such a pretty young promising woman, are you in any relationship?
Hmmm! I’m sorry no comment.