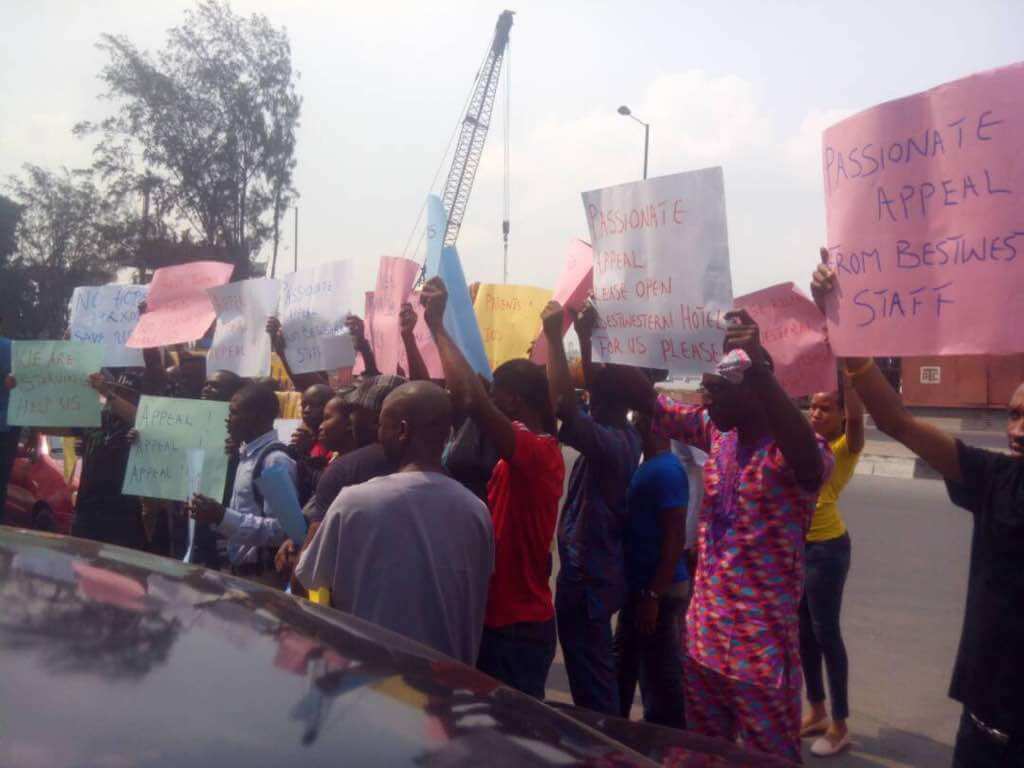 Members of staff of the embattled Best Westen Hotel, Allen Avenue, Ikeja on Thursday November 30, 2017 stormed the corporate office of the Asset Management Company of Nigeria, AMCON to peacefully protest the unjust takeover of the hospitality facility.
AMCON had locked up the facility some months ago on grounds of a debt owed by the Management of Suru Group of Companies which owns the hotel.
The staff were seen carrying placards with various inscription, urging AMCON to review the takeover so that they can get back to work. 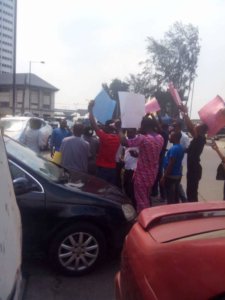 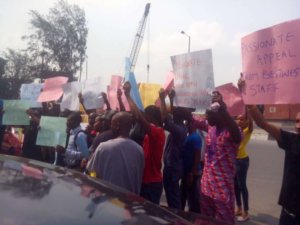 Speaking with the Press, one of the protesters who pleaded anonimity lamented his pathetic financial predicament since they were forced out of the building.
He said :

Ever since we were chased out of work by AMCON, I have found it difficult taking care of my wife and children. About the time I lost the job, I haven’t paid my rent and my children’s school fees. As I speak to you, my kids could not sit for their exams as they are still owing school fees. My rent is due and I await a Quit notice as there is no job out there.. He pleaded that AMCON should consider his condition and revisit the situation.

Another staff who also spoke with City People lamented how her aged mother was critically ill in the hospital as she has been on a regular medication which runs into tens of thousands, and she could no longer cope with the bills ever since she stopped working after AMCON took over.

Looking at the brighter side, she believed AMCON can save the situation as the facility was not running a bad loan.

“I see no reason in the first place why the facility should be shut down because we are not running on a bad loan but a servicing loan”.
“It’s not that we are not paying at all..and the only reason or condition that can warrant a foreclosure is if we have a bad loan”,

she stated.
Our efforts to speak with AMCON officials proved abortive as armed men prevented the press and protesters from accessing the AMCON building

Speaking with the GMD of Suru Group, Mr Edward Akinlade on phone, he said he’s currently out of Lagos and was unaware of the protest. He said he believed they decided to carry out the protest based on his transparent mode of operation as nothing is hidden from them”.