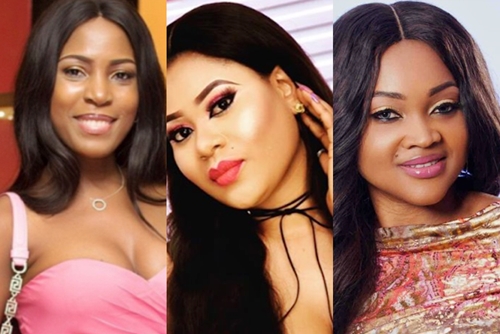 An N500 million lawsuit has been slammed at popular Nigerian blogger, Linda Ikeji, and Nollywood actress, Mercy Aigbe by Opemititi Ajayi, the lady accused of being Lanre Gentry’s mistress.

In what could be best described as a drastic action against the defamation of character of its client, Opemititi Ajayi, a law firm, Afolabi Fashanu & Co has written the duo of Nollywood actress, Mercy Aigbe and popular blogger, Linda Ikeji over the alleged frivolous and malicious statements uttered and published respectively by the duo.
The drama reportedly started in April after LIB broke the story of Mercy Aigbe’s marriage crashing, and shortly after, the blogger published the photos of Opemititi, saying that the lady was ‘fingered’ as Gentry’s mistress – the reason why Mercy Aigbe’s marriage failed.
The blogger who in the article dragged Opemititi’s name in the mud without any backing evidence; an act of crime as codified in the cyber crime laws of Nigeria, said, “Reliable sources tell us that Queen Stunner used to be like a younger sister to Mercy Aigbe, before things went south,” adding that Opemititi “has been fingered to have allegedly caused the marriage crash.”
Mercy Aigbe on her part spoke in an interview with Broadway TV and claimed that her husband slept with Miss Opemititi, a statement which is unsubstantiated and allegedly fabricated.
However, the compliant, Opemititi’s lawyers have demanded a retraction and public apologies from both Mercy Aigbe and Linda Ikeji, in the media, including their social platforms, and also demanded a total sum of N500m each from the duo, as damages.
See the documents below: Rihanna Reacts To Photos Of Her Yelling...