Bookmaker Pays Out On Terry Substitution Against Sunderland 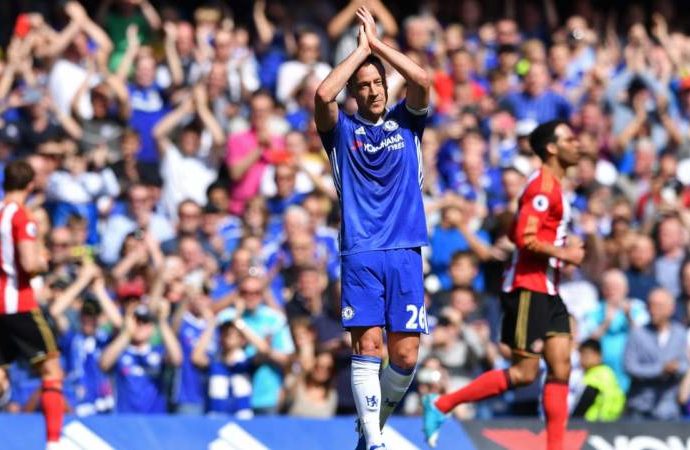 A bookmaker has paid out to three people who bet on the specific time of Chelsea captain John Terry’s 26th-minute substitution against Sunderland at odds of 100-1.

Paddy Power accepted the wagers on Terry being substituted between the times of 26:00 and 26:59 in Sunday’s Premier League match at Stamford Bridge, his last in the competition as a Chelsea player.

Relegated Sunderland was aware of the plan — which Terry said was his idea — and a Premier League source told ESPN FC that the organisation was relaxed about it.

PA Sport reported that it had spoken to two of the bookmakers’ customers, who won £2,500 and £1,000 respectively from bets on the change.

Paddy Power said it had “replied to a novelty request for odds on John Terry’s substitution,” from the three customers.

The substitution had been forecast on social media by a Chelsea fanzine editor before kick-off, and Terry said after the match that the idea had come from him to tie in with his squad number of 26.

There was precedent at Chelsea, with Didier Drogba having been carried off by teammates midway through the first half of a fixture with Sunderland on his farewell appearance two years ago.

Two of the people who won their bets on Terry with Paddy Power said they had placed wagers over the phone and one told PA Sport: “We thought maybe 10-1, 15-1 at most as there was a precedent set [by Drogba’s substitution]. I consider myself relatively lucky.”

Another said he had been “surprised the odds were that high.”

There is no suggestion that the decision to substitute Terry was anything other than an attempt by Chelsea to give their long-serving captain a farewell to remember.

The substitution process began when the clock ticked to 26 minutes — making it the 27th minute of the match — and by the time he had left the field through a guard of honour formed by his teammates it was the 28th minute.

But Paddy Power said it had honoured the bets because the send-off was “clearly planned for the 26th minute.”

Sunderland boss David Moyes said he had received advance notice of the plan.

The FA has been contacted by Press Association Sport for comment.

Bookmaker Pays Out On Terry Substitution Against Sunderland was last modified: May 22nd, 2017 by Arinze Ago

Cholera kills 315 in Yemen in less than month