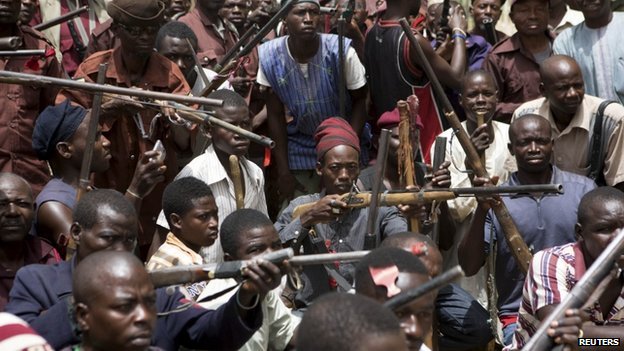 Arising from a letter containing 12 observations, and 10 demands presented to President Muhammadu Buhari by a high-powered delegation of Borno State on Monday, one observation informed the president that “the Borno State Police Command, which has the duty to preserve constitutional authorities in liberated and rebuilt communities, is faced with challenges of low and dependence on AK-47 rifles to counter Boko Haram fighters who attack communities with AA (Anti-Aircraft) rifles”.

Consequently, the letter in its second “ President should consider and approve, as a matter of case, the specialized use of AA rifles for the Borno State Police Command for capacity enhancement as against the current dependence on AK 47 rifles”.

Also raised, is the question of why a majority of 800 Civilian JTF fighters recruited into the Nigerian Army were not deployed to Borno State to join in fighting Boko Haram. This, the letter said, is despite the fact that the ex-CJTF members are “fearless and understand Borno’s terrain better”.

The observation was seventh in Borno’s letter, while there is a corresponding fifth demand for President Muhammadu Buhari to order the immediate deployment to Borno State, the same 800 soldiers drawn from ex-CJTF fighters.

When contacted, Brig-Gen SK Usman, Director of Army Public Relations, said “the Nigerian Army does not deploy based on the three extraneous variables of religion, ethnicity, or geography.” He also said that it is one of the reasons that the army is one of the most credible institutions in the nation.

Shettima presented a letter to the president, which he said contained some key observations and 10 demands requiring presidential intervention.

Although the delegation refused to make their demands public, an impeccable high-level source said the letter was divided into two parts.

The first itemized 12 observations and the other contained 10 demands arising from the observations. Both observations and demands were generated during an extraordinary security meeting convened by the governor, which had in attendance senior military officers, and other key security figures.

In a related observation, the letter told the president that more than 26,000 Civilian JTF members who fight alongside the military, depend on crude weapons.

Also, the letter made demands that the president should consider working with the National Assembly for equipping a select few Civilian JTF, with non-prohibitive arms and only for a specific period of time and under strict regulation by the military.

The source also said the letter informed the president that some members of the Civilian JTF who have been deeply involved in intelligence-gathering, identification and arrest of Boko Haram suspects in civilian populations, are worried the operation where repentant Boko Haram insurgents are being released to the population, could be breeding spies for insurgents.