Boy beaten to death by his own father [PHOTO] 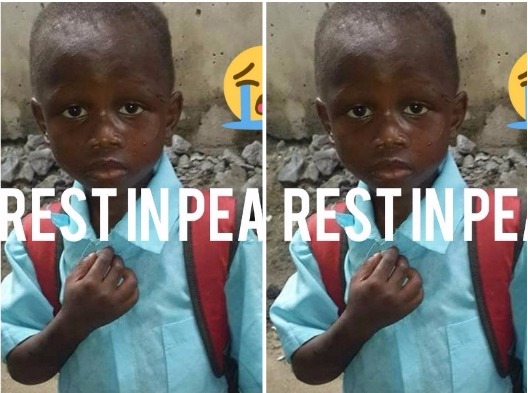 According to Instagram user, Sir George who knew the boy and at one time, fed him after his heartless father starved him almost to death, this was what happened;

‘What a cruel world. This week Tuesday, between the hours of 8 to 9 am. I saw crowd of people around my vicinity gathered this little boy, so I stopped by and inquired what happened. They told me this little boy on his way to school, stole doughnut from a shop. The people whom he stole the doughnut even gave him more of it and mineral and asked him to go. ‘

They all claimed that his father and stepmom have the habit of starving and beating him to stupor on daily basis. I saw so many scars on his body.I took the boy to my house, interviewed him, and he told me so many things. How he has been suffering since his mother left his father.

I gave him some biscuits, asked him to come and eat at my place anytime and promised to see his father this week before he left for school just to wake up this morning with shouting that his father has beaten him to death. His father has finally killed him. This happened in Port Harcourt, Rivers State, Nigeria.

Boy beaten to death by his own father [PHOTO] was last modified: May 20th, 2017 by Reporter