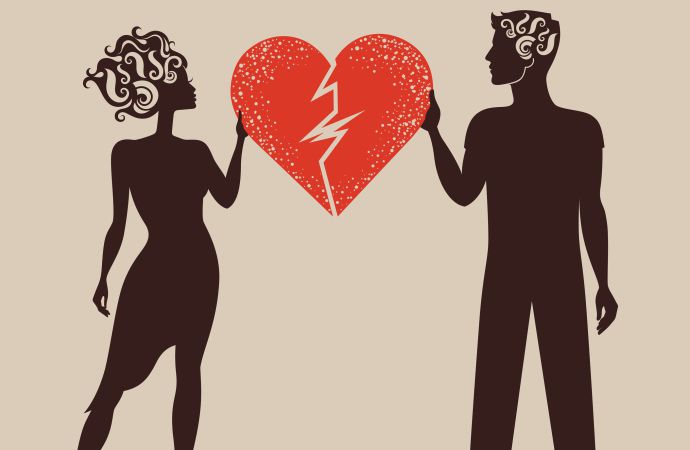 It’s possible to train your brain to get over a broken heart, according to Cambridge University neuropsychologist Professor Barbara Sahakian

If Professor Sahakian’s assertions are correct, the days of protracted periods of pain and heartache experienced after a breakup could be over.

Using a series of computerised tests, the academic says the brain can be trained through an exercise in which participants are asked to press a button every time they see an arrow pointing towards the left or right and to stop only once a buzzer goes off.

She says that the prefrontal cortex – the part of the brain responsible for things like reason, logic, problem-solving and memory – is stimulated through the computer exercises and as a result, becomes strengthened, much like muscles are developed with workouts.

These techniques are designed to help people stop fixating on specific events.

The idea is that by strengthening the prefrontal cortex, you’ll be able to train your brain to help you stop acting on feelings and impulsive behaviour.

“The frontal lobes in the brain are so important for inhibitory control, for inhibiting responses. People don’t realise that the frontal lobes exert control in many different situations, whether in a brain-training task or in stopping people ruminating on lost love,” she was quoted as saying in a Daily Mail report.

“It’s like exercising a muscle, and it might stop someone who is heartbroken from repeatedly texting their ex-partner. The brain would have the tools to put a stop to that.”

This form of brain training is also used as part of a treatment regimen for people suffering from obsessive-compulsive disorder.

Exercises that stimulate this part of the brain can help you respond better to emotional stress, such as the kind that you’d experience after a messy breakup, for instance, as well as curb the compulsive behaviour associated with the end of a relationship such as wanting to call or drunk-text your ex.

“The thing about love is that it can affect the wrong systems in the brain,” Professor Sahakian says. “People can become quite compulsive about it all, which is important if you’re going to marry someone and have children with them, so you need strong feelings.”

Brain training could be the key to healing heartbreak was last modified: July 18th, 2017 by Arinze Ago