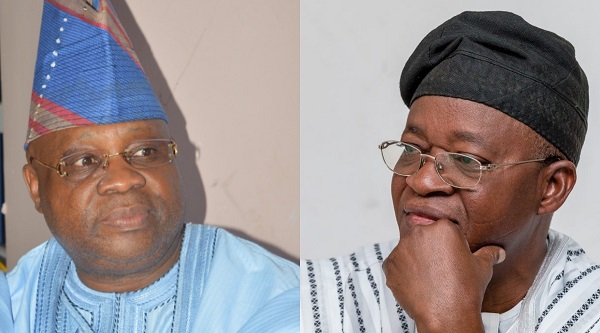 The court of appeal in Abuja has ruled that Gboyega Oyetola of the All Progressives Congress (APC) is the winner of the Osun state governorship election.

At its sitting on Thursday, the appellate court nullified the judgement of the election tribunal declaring Ademola Adeleke of the Peoples Democratic Party (PDP) winner of the election.

Adeleke was declared a winner by the election tribunal after he went to court to challenge the election victory of Oyetola, as announced by the Independent National Electoral Commission (INEC).

The tribunal ruled that the rerun election conducted in the state after the initial poll was illegal.

Joseph Fuwape, the returning officer, declared that Oyetola won with a total of 255,505 votes while Adeleke polled 255,023 votes.

But the tribunal had ruled that Oyetola was not validly returned as the winner of the election.

It had said the rerun which finally produced Oyetola as the winner was the outcome of the “illegal” cancellation of results in some of the polling units during the main election.

It also held that the returning officer lacked the power to cancel the votes in affected polling units.

At the appellate court, one of Oyetola’s major contentions is that the judgement of the tribunal was “judicial hearsay”.

He recalled that the judge had been absent at one of the tribunal’s sitting — on February 6 — but that the proceedings of that day formed part of his lead judgement.

He, therefore, urged the court to nullify the tribunal’s judgement and uphold his victory as declared by INEC.

Delivering the lead judgment endorsed by four of a five-member panel, Jummai Sankey upheld Oyetola’s argument and ruled he remains the authentic winner of the election.

He held that Obiorah’s absence at the tribunal’s sitting nullified the entire proceedings as well as its earlier judgement.

One of the members of the panel George Mbaba however, disagreed from the majority judgment.

He held the said absence of the judge on the said day is not confirmed and is “mere speculation”.