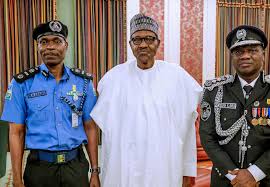 Inspector-General Muhammed Adamu has implemented the much anticipated decision expected of him as the police boss having been sworn in on January 15 by President Muhammadu Buhari.
Adamu compulsorily retired seven Deputy Inspectors-General of Police (DIG) and others who are his seniors in the police. That’s the custom.

At this time of this report police authority is yet to make formal announcement, but it’s learnt that force spokesperson, Frank Mba, will address the press probably on Monday in Abuja, the Federal Capital Territory.

The seven officers were amongst 15 senior officers we reported on this medium that were likely to be retired.

The seven DIGs and eight assistant inspectors-general were identified as having joined the police before Adamu, who was appointed after the former IG Ibrahim Idris was retired as he attained 60 years.

The norm is that senior police officers must be retired when an officer junior to them in service or lower in rank is appointed to lead the institution.

When Idris was appointed IG in 2016, more than 20 DIGs and AIGs were compelled to retire from service to enable him constitute his management team.

BREAKING: New IG lays of All His Seniors was last modified: January 28th, 2019 by Igbokwe John