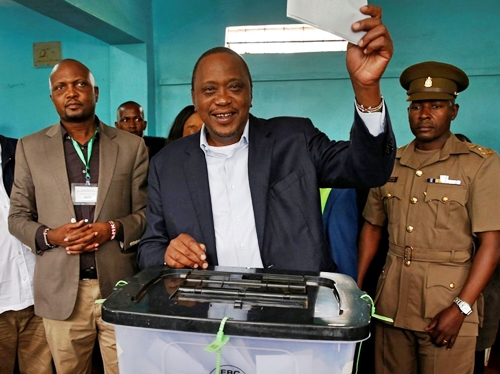 President Uhuru Kenyatta is set to be declared the winner of the Oct. 26 repeat elections by a landslide, granting him a second five-year term in office.
The election commission results show that Kenyatta had garnered over 98% of the vote, a total of 7.4 million votes.
But rather than the result bringing a close to nearly a year of campaigning and electioneering, Kenya finds itself at the beginning of a new phase of political uncertainty which threatens to tip over into violence in certain regions of the country.
The overwhelming vote in favor of Kenyatta was expected after opposition leader Raila Odinga withdrew from the race in early October. Odinga and his supporters boycotted the election after accusing the commission of stonewalling meaningful reforms that would have ensured they didn’t repeat some of the “irregularities and illegalities” committed in the Aug. 8 polls.
Those indiscretions led the supreme court to nullify the results of the presidential election on Sept. 1, a first in Africa.
The turnout was low across the country, given that more than 80% of the registered 19.6 million voters participated in the August election. Elections were also indefinitely canceled in four counties aligned with Odinga, where officials couldn’t open polling stations.
Despite refusing to participate, more than 73,000 people voted for Odinga in the election run-off.
The Independent Electoral and Boundaries Commission (IEBC) was again put on the spot for the way it tallied and verified the results. On Sunday (Oct. 29), IEBC announced that 7.5 million had so far voted, and provided a voter turnout of 42.8%—instead of 38.4%.
At one point, commissioner Abdi Guliye also said that results had come in from some of the constituencies where elections didn’t even take place.
If no petition is filed against the results of the election, a swearing-in ceremony for Kenyatta is expected to take place 14 days after the declaration as per the constitution.
Breaking News: Uhuru Kenyatta Wins Disputed Kenya Presidential Elections was last modified: October 30th, 2017 by Arinze Ago

Gambia will reverse its ICC withdrawal –...

Togo purges its violent past with voodoo...