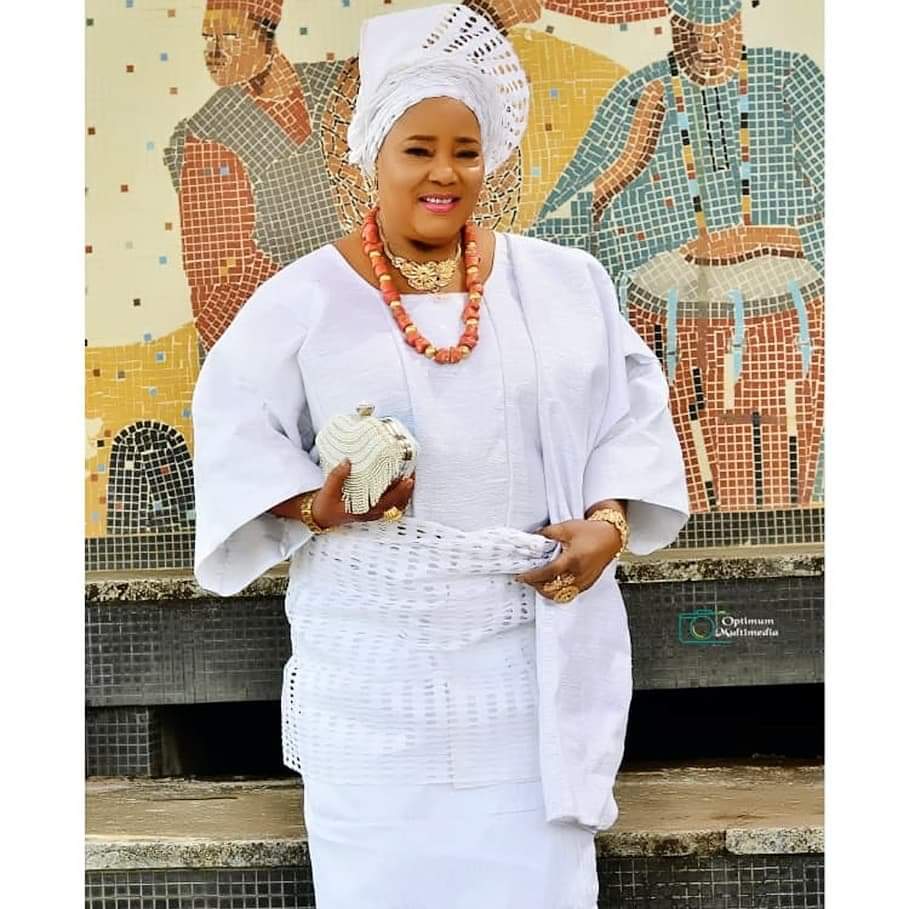 Chief Mrs Beatrice Olabisi Osibogun JP was born on the 30th of January, 1949 into the Late Pa Ashiru Alli and Alhaja R. A. Alli of Idepo Quarters, the illustrious Keregbetu Dynasty of Ijebu Ode. Her father was a Civil Servant (Cocoa Examiner) , whilst her mother was a business woman.

Education: As a civil servant’s daughter she attended many primary schools notably in Abeokuta, Ibadan, Akure , Ijebu ode and Lagos. For her secondary school education she attended Ahmadiyya Secondary School in Orile-Agege Lagos between 1965 and 1969. Thereafter she attended Government Women Training College Idi Aba, Abeokuta where she obtained a Diploma in Catering and Hotel Management between 1973 and 1975. She also obtained the Advanced Certificate of Royal Society of Arts(RSA) London between 1974 and 1976.

Career: She worked with the Western State Government as the Matron in many secondary schools. On creation of Ogun State on the 13th of February 1976, she numbered among the civil servants whose pioneering efforts ensured the smooth take-off of the State. She served as Matron in Reverend Kuti Memorial Grammar School, Anglican Girls Grammar School, African Church Grammar School, St Leo’s Teacher Training College Onikolobo, Baptist Teacher’s training college Idi -Aba all in Abeokuta and then Methodist Teacher Training College Sagamu Ogun State. She is a distinguished member of the Hotel and Catering Association of Nigeria.

Marriage and Family: She got Married in 1971 to the First Permanent Secretary , Office of the Military Governor (PSOMG) of Ogun State Late Otunba O. A. Osibogun(Otunba Ajana of Ijebu Land), a scion of the prominent Balogun Onafowokan Family(The Otubu Dynasty) of Ijebu Ode. She is blessed with two Daughters Fela Osibogun an Account Person with The HSE (Health Services Executive) Dublin, Republic of Ireland and Adeola Osibogun-Owolabi who based in London. She is also a Mother figure , mentor and Counselor to so many “ Children”

Social and traditional recognition: In 1982 she was conferred with the traditional title of AROBAKE OF IMORU IJEBU. On 11th of May 1985 The Paramount Ruler of Ijebu Land, The Awujale of Ijebu Land,His Royal Majesty Oba Sikiru Kayode Adetona Conferred her with the NOVEL and BEFFITING title of OMESO OF IJEBU LAND in recognition of her distinct elegance and fashionability. She is a notable Member of the Awujale Royal Court and the only Female member of the Ojude Oba Committee spaning over 20years.

On the 27th of April 2020 exactly 6years after Her Late Husband joined the Saints, The Awujale of Ijebu Land Oba Sikiru Adetona conferred on her The Highest Title any Woman can attain in any Yoruba Kingdom THE IYALODE OF IJEBU LAND….OBA OBIRIN AKILE IJEBU (KING OF ALL IJEBU LAND WOMEN FOLKS) .

She was sworn-in on the 9th of May 2020 at the Awujale’s Palace in a low key ceremony in accordance with the covid-19 rules and regulations.

Iwuye ceremony and reception will be after the covid-19 pandemic has been solved , for health and safety purposes In Jesus Name.

The Day My Father Challenged Me Over My Choice Of Career – Star Actor, Femi Adebayo Revealed