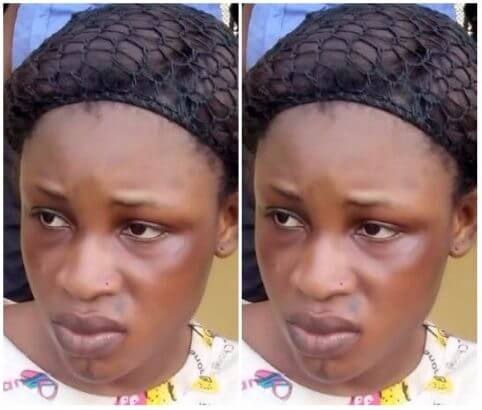 The woman, Bose Christopher, was arrested for alleged involvement in cultism, 24 hours to her proposed wedding ‘introduction’ in Abeokuta.

The police said the suspect was arrested by the Federal Special Anti-Robbery Squad, FSARS, during the initiation of cult members in a hotel.

PREMIUM TIMES reports they said Miss Christopher had gone to the initiation ceremony with a boyfriend when she was arrested alongside other suspected cultists.

The accused spoke with PREMIUM TIMES on Wednesday while being paraded alongside 30 other members of the cult group‎ at the police headquarters, Eleweran in Abeokuta.

My introduction was supposed to hold the day after we were arrested, but I couldn’t go.”

But Miss Christopher denied being a member of the cult group or knowing that her boyfriend, who she claimed she started a relationship with two weeks earlier, was a cultist.

“I met him (boyfriend) about two weeks ago and I never knew he is a cult member. He just called me after I closed from the shop to join him at the party,” she said‎.

The suspect who claimed to be an apprentice at a fashion designing workshop, also disclosed that her intended husband‎ had since stopped communicating with her since her arrest by the police.

Bride-to-be arrested with another boyfriend during cult initiation was last modified: October 5th, 2017 by Reporter