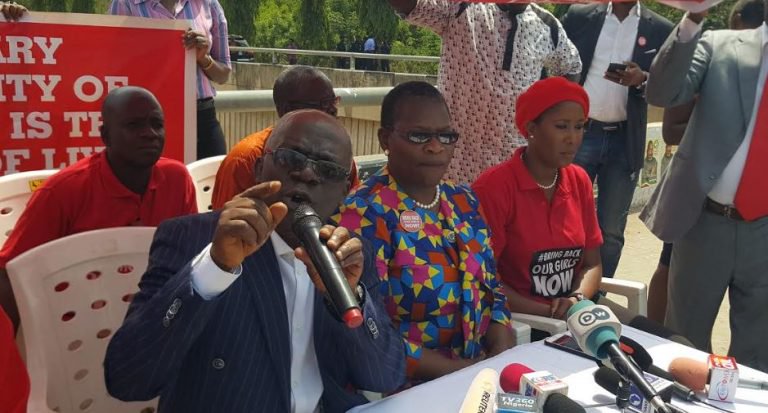 The Bring Back Our Girls (BBOG) movement has given the federal government seven days to rescue the 110 schoolgirls abducted in Dapchi, Yobe state.
The incident happened four years after the insurgents kidnapped 276 female students of Government Secondary School, Chibok.
The BBOG said it is “infuriated” by the circumstances that led to both abductions.
In a statement issued on Tuesday, the group said Femi Falana, human rights lawyer, will lead a legal team to sue the federal government “for the negligence that has led to the abductions”.

Falana joined the group at its sit-out in Abuja, calling for the release of the girls.

The group posed some questions to the federal government regarding the arrest, including: “How is it that nearly four years since the abduction of our Chibok girls, we are faced with yet another similar tragedy by the repeat abductions of schoolgirls in the Dapchi girls’ tragedy?

“How is it possible that a terrorist group that we were informed to have been completely defeated was able to abduct 110 Dapchi girls.

“How were the school and community left to be vulnerable to this tragedy? What happened to the Safe Schools Initiative that was signed on by the Federal Government in 2014 and to which it committed $10m alongside other donations by the several donors, including the international community?

“Why was there a deliberate attempt by the federal government to cover up the abduction through false reports and claims of rescue in the immediate aftermath of the abduction?
“On what basis was the military withdrawn from Dapchi? Why was there no immediate response to the abduction of the Dapchi girls? What happened to early warning signal system as part of security architecture for areas like Dapchi in the theatre of war? We ask for #TheTruthAndNothingButTheTruth.

“How was it that the terrorists carried out their activity for hours unchallenged by forces of the FG? Can we not assume a connivance between the abductors and all those in the military and security command with responsibilities for the Dapchi, Yobe state area?

“How was it that 110 children were transported in a convoy of vehicles for more than twenty-four hours over distance of hundreds of kilometres without their abductors encountering any Nigerian military or police security roadblocks? Why was there no air surveillance by the Nigeria Air Force which is still at the battlefront? If any, how did the Nigerian Air Force fail to track the movement of the terrorists motorcade as they made away with our schoolgirls?

“What happened to the recently commissioned UAVs said to have been procured for such tracking purpose? What happened to our Intelligence assets – satellite links & military aircraft – that were procured to prevent & abort such scale of elaborate attack by terrorists?”

REVEALED: WHY ROCHAS OKOROCHA ENDORSED HIS SON IN-LAW AS THE NEXT GOV OF IMO

Revealed: Why Rochas Okorocha Endorsed His Son In-Law As The Next Gov of Imo