Budding Act, MINENT RICHY Is The New Face Of Rap 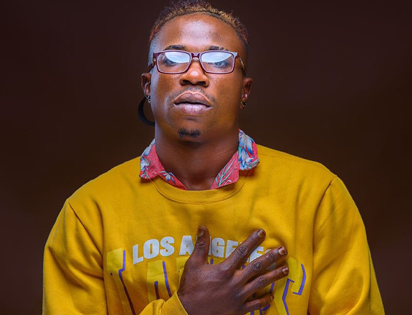 After spending over 8 years in music industry, the new kid on the block , Bayo Monday, aka, Minent Richy has decided to make a bold entry back onto the scene with the release of his first official single, ‘Muje Baya’. The National Institute of Sports graduate, who said that his single intends to correct the high level of indecent dressing among girls, added that he dumped sports for music because music gives him the opportunity to express himself properly. Minent Richy dropped his first single ‘Erule’ when he started music officially. He followed it up with the release of ‘Kosochi’. ‘Muje Baya’, he said in this interview, was inspired by the high level of indecent dressing among girls of these days.

I’m Bayo Monday, a singer and songwriter. I hail from Ondo State, Akoko South East, to be precise.

What brand of music do you do?

My brand of music is Afrocentric Hip-Hop. I also do Highlife. All my songs are mostly inspirational songs, they are the kinds of songs that you will listen to and you will get inspired. I didn’t like music as a child but I was just fond of singing.

Are you on any music label?

Yes, I am. I’m on Moladi Music, a recording outfit owned by a respected politician who loves music, Senator Bode Olajumoke. It’s a new label he established this year, 2017. I’m the only signee on the label yet.

What stands your music out?

The unique thing about my songs is my composition, my pattern of song and my creativity. I can sing like anybody else.

Who among the celebrity singers would you like to duet with?

When did you start singing formally?

I started singing in 2006 but professionally I started in 2012 when I stopped doing other jobs to face music. That was when I released my first hit titled ‘Erule’, meaning ‘people around me’ in Ondo dialect. ‘Muje Baya’ is the latest hit. ‘Muje Baya’ is asking us to return to the old tradition of decency. It talks about back to the root.

I had been a lover of music from childhood. I had been following Fuji  as a teenager. I actually wanted to sing Fuji but I later found out Hip-Hop music is easier to do than Fuji, so I got into Hip-Hop. My belief was that, for Fuji, you would have to stress your brain to compose and you must gather all the drum sets and mount sound speakers to form a complete band, but in Hip-Hop,  you have to enter the studio and just do your songs, every backup instrument was already set for you. That was how I started doing Hip-Hop.

‘Erule’, your first single, did it really launch you to stardom?

Yes, it did. ‘Erule’ became an instant hit in Kogi State. In 2012, it gave me my first ever award as Kogi State best artiste.

What kind of job were you into before you became a professional singer?

I was into physiotherapy. I graduated from the National Institute of Sports (NIS).

How did you meet Senator Bode Olajumoke, the owner of your label?

I met him in 2014 during his political party’s campaign. I was one of those that worked with him. I did a promo track to support the campaign and the track became the national anthem. Based on that, plus other field efforts, his party, the People’s Democratic Party (PDP), won Ondo State. I actually encouraged Senator Olajumoke to set up the record label. After the election, he called me and asked what I wanted him to do for me. I told him that I’m a singer and all I wanted from him was to help promote my music. And he promised to promote me to any level. But my manager said that instead of making him to spend money to promote me on someone else’s label, we should ask him to set up a label of his own and we use that for our recordings. He agreed to that also, and that is how he set up the record label. And the support from him has been tremendous since then.

What were the terms of your contract with the label?

Senator Bode Olajumoke is like a father to me. I have to be honest with you; there was no formal agreement between us for now. Like I have told you, I’m the only signee on the label, and I told you what led to the setting up of the label. Besides, the senator has given us the free hand to run the place. We are free to invite other upcoming artistes on the label as soon as ‘Muje Baya’ makes the hit. He is a man that helps people.

It has been rough and tough. Like they say, to become a man is not a day’s job. I have faced challenges and I have surmounted challenges, to the glory of God. The most challenging moment I have had growing in music was lack of  necessary contacts and links. It was a tough experience. But since I met the senator, God has lifted the biggest part of the burden off me. The worst that can happen to any growing artiste is not to have links of those that can sponsor him. It also applies to anyone who desires to grow in life. No matter your talent or competence, if you don’t have the opportunity to be known, then you are nowhere yet.

When was your experience facing the crowd and what was it like?

I have performed at many shows with crowd but the crowd at the Lokoja concert that I was featured was massive. That was my first time of facing a big crowd. But I was not scared at all, no stage fright. It is because I had built enough confidence singing at beauty pageants and other similar shows in the past.

What is your plan for the future regarding your music?

I have ladies as friends. I’m not married yet. I’m not thinking of marriage now. My focus is my music. No distraction.

“I could not attend university because of N15,000” – Bisola Aiyeola