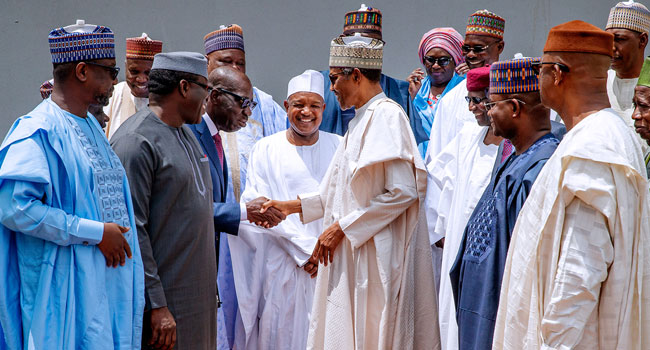 Governors of the All Progressives Congress (APC) met withPresident Muhammadu Buhari at the council chamber in Abuja to thank him for the support shown in areas of security and economy.

According to Chairman of the progressive Governors forum and Governor of Kebbi state who spoke with state house correspondents after the meeting, said the Governors have promised to push for greater cooperation between the state and the federal government.

He added that the release of close to N2 trillion by President Buhari to aid infrastructure spending, refunds on federal roads and Paris club, will ensure increased investment and security enhancement in conflict zones.

The meeting had in attendance, Governor Godwin Obaseki of Edo, Dapo Abiodun of Ogun, Babagana Zulum of Borno, Babajide Sanwo-Olu of Lagos, Abdullahi Ganduje of Kano, Bagudu of Kebbi, Simon Lalong of Plateau, Gboyega Oyetola of Osun, Mai-Mala Buni of Yobe, Abdulrahman Abdulrazaq of Kwara and Abdullahi Sule of Nasarawa are in attendance.

Also in attendance were the secretary to the government of the federation, Boss Mustapha and the Chief of Staff, Abba Kyari.

Just In: Gov Sanwo-Olu Says Reconstruction Of Lagos-Badagry Expressway To Commence In 2 Weeks