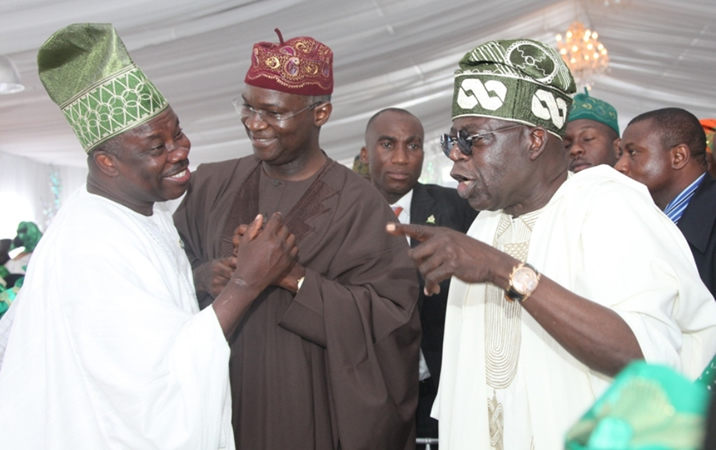 As the count down to the 2023 presidential election has started in earnest, the permutation is that a former Ogun Governor, Senator Ibikunle Amosun, will be used to checkmate APC’s National Leader, Asiwaju Bola Tinubu, in the South West area. Can this plan work? City People reveals the game plan below.

Can Senator Ibikunle Amosun hijack the leadership of South-West politics from the APC’s National Leader, Asiwaju Bola Ahmed Tinubu, as it is being currently rumoured? That is the big question many political watchers are asking.

This is because there are strong speculations that Senator Amosun is planning to play big in 2023. He wants to be the next President of Nigeria. It is believed that he is the candidate the Buhari’s loyalists are planning to use to counter Asiwaju’s presidential ambition. They feel Amosun is a strong force to neutralise any move Asiwaju is meant to make. That is why since President Buhari came in for a 2nd term, Amosun has been able to get his Boys plum jobs in the present dispensation. The Buhari’s loyalists feel Amosun’s profile is as intimidating as that of Asiwaju, in many ways. They argue that both are top Accountants. Both have been Senators. Both have been 2-term governors in the South-West. And both have formidable structures that they could deploy when the chips are down. They are also both phenomenally rich.

There is no doubt that the immediate past Governor of Ogun State, Ibikunle Amosun, is a man who could not be pushed aside when it comes to wielding influence in his home state and even at the federal level. His 8 years as the Governor of Ogun state could not be easily forgotten or erased from the history of Ogun State in another decade. Although he is now a Senator, representing Ogun Central a seat he occupied level even before he became the Governor of Ogun state and since then, his political family is one of the powerful in Ogun state till date. He is a no small fry, in the common parlance, despite that his choice Guber candidate,  Akinlade was not favoured in the party in the last election, which led to Amosun’s faction in APC moving to APM, but could not pull the weight of APC, his candidate lost the election to Governor  Dapo Abiodun of APC.

Currently, according to party men and residents of the state (Ogun), the former governor is gaining an upper hand over his successor, Governor Dapo Abiodun, in the scheme of things at the federal level. The persons who have clinched federal appointments in the state give a clearer perspective.

Even a former Governor and chieftain of the party in the state, Chief Olusegun Osoba, who stood firm with the party when Amosun kept campaigning for a candidate of the opposition party, seems not to have the kind of influence Amosun has at the federal level.

In 2019, a postal of Amosun surfaced online where it’s written he would be contesting for President in 2023. The news went on for more than a month before his media team released a statement to say the former Governor knew nothing about the posters and news circulating in town, that the Senator had his hands full with federal projects and won’t be distracted with such news although many have argued that the Owu politician is seriously nursing the ambition. Political analysts who have studied Amosun closely also said the news had too many elements of truth considering the way Amosun is moving at the federal level. Most of his loyalists now hold key posts at the federal level, while Amosun himself is enjoying his close relationship with President Buhari.

Since the inception of the current (fifth) dispensation, all federal appointments due to Ogun State, whether done discreetly or openly, have gone the way of people loyal to Amosun, and as expected, this development has boosted his support base, especially by the beneficiaries and those still eyeing federal appointments.

This development was said to have shocked Abiodun, who belongs to the camp of the Vice-President, Prof Yemi Osinbajo, and Osoba. This is understandably a matter of concern to people in the camp.

Amosun’s childhood friend and his Commissioner for Works and Infrastructure, during his 8-year term, Olamilekan Adegbite, was appointed the Minister of Mine and Steel Development by President Muhammadu Buhari.

In drawing from his goodwill with the President, Amosun also succeeded in pushing his cousin, Adeleke Adewolu, to be appointed the Executive Commissioner, Stakeholder Engagement, at the Nigerian Communications Commission. He replaced Sunday Dare, who is now the Minister of Youths and Sports Development. Dare’s appointment to NCC and now as a minister could safely be traced to the National Leader of the ruling party, Asiwaju Bola Tinubu.

Adewolu contested but lost the House of Representatives seat in Ifo/Ewekoro Federal Constituency on the platform of APM, a party openly supported by Amosun.

Some stakeholders in the state argued that his appointment was a compensation for his loss.

In addition, Amosun was able to push for his former Commissioner for Agric and Urban and Physical Planning, Mrs Ronke Sokefun, to be appointed the chairman of the Governing Board of the Nigerian Deposit Insurance Corporation NIDC.

Amosun displayed his closeness to the President in getting his loyalist to get the job, given that a nominee, Chief Bode Mustapha, had been screened by the National Assembly for the position.

According to some party men in the state, Amosun reversed Mustapha’s fate in retaliation for his open declaration of support for Abiodun as the APC governorship candidate.

Amosun was also instrumental to the appointment of the serving Postmaster-General/ Chief Executive Officer of the Nigeria Postal Services, Bisi Adegbuyi.

However, this is believed to be part of the calculations ahead of the 2023 presidential and general elections in the state.

These imply that Amosun remains highly influential in the scheme of things within the APC, particularly anything that has to do with the involvement of the President, in spite of his failure to field his preferred governorship candidate on the platform of the party.

This seems to have led to disagreements within the ruling APC in the state, which created factions in the party.

Last year, the defeated candidate of the Allied Peoples Movement (APM) in the March governorship election in Ogun State, Adekunle Abdulkabir Akinlade, announced his return to the All Progressives Congress (APC), his return to the APC followed the dismissal by the Supreme Court of his petition against the election of Governor Dapo Abiodun of the All Progressives Congress (APC).  According to an inside source from Amosun’s camp, the development was part of the plans to ensure Ogun APC is controlled by Amosun’s men.

Amosun, on the other hand, is not far from home, he is still very relevant and popular. He still holds a strong force in Ogun State. He hardly misses home every Friday for Jummah services in his Ibara home, and as usual, the area is always filled up with his loyalists and supporters waiting to see him, some for political issues and some to collect cash gifts which he has not stopped giving out even after leaving office. His new year party is still the talk of the town; as he spends heavily to celebrate it. Recall that when Amosun became governor of Ogun state in 2011, his predecessor, Otunba Gbenga Daniel, was off the scene immediately for more than five years. He was in court many times for different cases. This was not the case for Amosun, as he keeps getting things done and becoming more influential and powerful in the state and at the federal level, and also working underground for his 2023 presidential ambition.