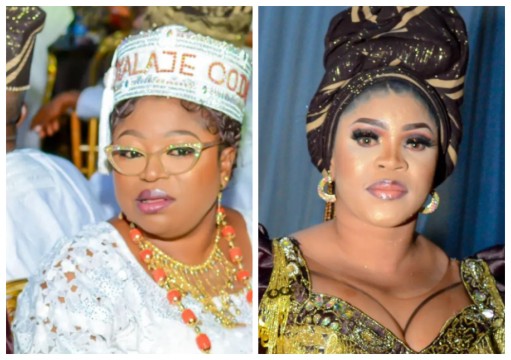 On Saturday, 7th of May, Lagos went abuzz as socialites ,friends and family of Lagos Biz man, Olanrewaju Akanni Rasak popularly called Lamex by his close pals, gathered together to celebrate as his daughter, Azeezat Dolapo Akanni got married to her hubby, Azeez Folajuwon Majiyagbe in a colourful wedding.

It was an event which literally shut down Ikeja axis as over 1000 celebrities trooped to The Havens Event Centre, venue of the wedding. It was a show of affluence and class as many celebrity men and women dazzled in their best apparels and accessories, most especially women.

They wowed in their diamond and gold jewelries such that their neck was doing all the talking for them. What about the beautiful 120k black and gold Aso ebi picked for the wedding? It was beautifully sewn into different styles and complemented also with a black and gold Aso oke headgear.

Let’s quickly tell you that the Aso Ebi defined the moment for the day, as it was worn by 98 percent of all the celebrity women at the party. It was supplied by one of Lagos society women, Morufat Kalejaiye, the brain behind Morkals fabrics.

It was a colourful affair as many guests looked dapper in the Colour Code of the day which is black and gold. Who else would have had this big assemblage of celebrities if not Lagos socialite and top maritime big man, Alhaji Rasak Akanni Olanrewaju. He is one of the big boys in Lagos who has his hands in many businesses.

Very humble and highly dedicated to his job, He really does not enjoy being mentioned in public but his daughter’s wedding was one that got the Ikeja axis busy in Lagos. He is one of the close allies of Globacom Boss, Otunba Mike Adenuga, He has several chain of business scattered around Lagos and he is so popular within the freight forwarders in Lagos. He owns R&A Hotels which has branches in Ikeja, Agege ,etc, Lamex Beverages and so on. His businesses spread freight Forwarding, Oil and Gas and he is also into importation of wines.

He has enjoyed close friendship with many musicians especially K1 de Ultimate who happens to be one of his close pals and who was on the band stand on the wedding day. His celebrity friends wives are all so close ,no wonder many celebrities women showed up for the wedding.

He is happily married with children and his beautiful wife, the mother of the bride, Hajia Simbiat Akanni looked very ravishing on her daughter’s day. She looked beautiful in Sanyan Aso Oke and later changed to a beautiful lace outfit for the classy reception. So also was the groom’s mum, Mrs Mohammad Majiyagbe.

They both took the lead in dressing at the wedding and several other society women followed.
On this endless list are celebrity women who dazzled in their gold and diamonds at the wedding. They were all stylish and looked like the stars that they are. On this list is the pretty Olori Elegushi, Sekinat Aramide Elegushi popularly called Queen Gushi, she was the cynosure of all eyes. She looked so beautiful in her outfit with a dazzling diamond necklace.

At this wedding were some set of celebrity women who wore an all peach combo, a peach lace and peach gele. They are a set of celebrity women who put the whole wedding together, with the brides mum. They all wore a particular set of lace. On this list is the jewelry merchant, Chief Mrs Sade Adesoye, the CEO of jewelry Affairs, she took the lead with her dressing, she matched it with a diamond necklace as well, in this pinkie outfit are popular business woman, Funke Akinyera ,the pretty wife of Lagos socialite, Tunde Akinyera, she also looked good in the peach Aso Ebi and also wore the black and gold lace at some point.