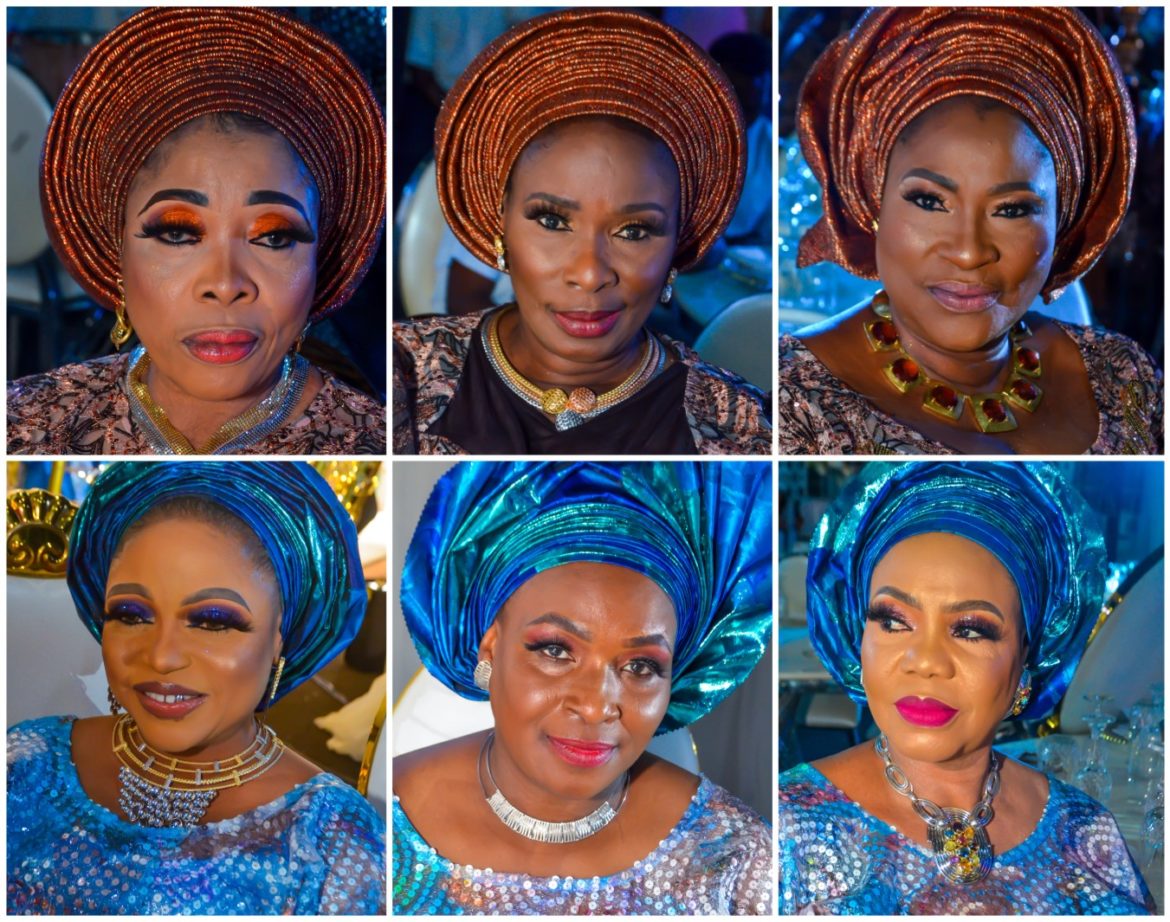 It was a fairytale wedding of the year 2020 and many havent stopped talking about the grand 2-day wedding of Ijebu billionaire, Otunba Olaide Fowosere’s wife, Hajia Aminat Sola Fowosere Daughter’s wedding which literally shut down the whole of Lagos on 13th and 15th of December, 2020.

The event kicked off with Mothers’ Night on Sunday, 13th of December 2020, while a Grand finale, which was an engagement played host to many guests under the same roof on Victoria Island. The mothers’ night invites message reads: “Dear Mothers, It is my pleasure to invite you to the Mothers’ Night celebrations in light of the wedding of our lovely daughter, Temitope and beloved son Oluwasegun Adeyefa.

*Date:* Sunday, the 13th day of Dec., 2020 at Osborne Foreshore, Ikoyi”. It has many super rich Nigerian society women and men. Many who already figured out how classy the mothers’ night would be already looking foward to the talk-of-town wedding. Why won’t they? The Fowoseres don’t do things in small measure as Otunba Laide Fowosere always leaves no stone unturned when it comes to having one of the best parties in town.

Right from the conception of the  wedding hashtag, #Olutemi2020, one could notice that the Fowoseres, Shoduke, and the Adeyefas were ready to play big as they came fully prepared to seek the hands of Temitope in Marriage. From the Engagement Gift the Adeyefa brought , one could see that they were also not small fries. They are from a royal family in Ondo.

It is not just the Gift of the Engangement that was impressive, the fashion statement of many celebrity women who came to shine throughout the event could not be ignored either. Why won’t they want to outshine one anothet? Mrs Fowosere is a fashion pacesetter. She has eyes for details and loves to stand out even when she steps out at people’s parties. Many guests who knew her taste for luxury gifts were not suprised when she stepped out at the Mothers Night in a pink flowing kaftan and her flawless skin facebeats by “Tshakky” glittered while she walked majesticlly like an Ijebu Igbo Queen and an Ekiti Princess. Her diamond was sourced from number 1 diamond merchnant, Otunba Golashade Adeshoye. So also is Mrs. Adeyefa who .spoted “TAD BY Adeola”. She is one of the big celebrity Designer in Lagos.

While many were still talking about the Sunday’s outing? Mrs Fowosere overshadowed all with her gold monotone Gold Luxury look on Tuesday. Yes! Only the Fowoseres can have a hall filled to Capacity on a working Tuesday. Her diamond was a fully stoned gold Set from “Jewellery Affaira” matched with a pointed stiletto shoe. Her luxury gold Seigo Headgear and Face were well, wrapped by “Banke Meshida” of BMPro.

Let’s gist about Mrs Adeyefa, the groom’s mother? The ebony pretty woman’s fashion sense is top notch as she stood out. She came with her handsfull of society women who came to show her love.

At a few minutes past noon, Otunba Folashade Risikiyat Adesoye changed the Fashion Game. It took only a Jeweller to rock that multicolour diaomnd rocked by “Jewellery Affairs”, boss that is why many super-rich celeb buy jewellery from her. Her HOH Aso-Ebi, which was rocked by 28 mothers sat well on her. What about Mrs Idiat Alli Balogun, the brain behind “Bukkazo” store on Lagos Island. She is also the elder sister of Otunba Folashade Adesoye. Her diamond was one of the best at the #onitemi2020. Many guests were admiring Hajia Bukola, Mrs Bimbo Pitan as she walked in like a princess with Mrs Kemi Balogun-Afolabi. Her diamond was also a multi-colour Diamond, which matched her HOH Aso-Ebi.

When Olori Sekinat Aramide Elegushi walked in with her husband, Oba Saheed Elegushi, many quickly cast a glance to see if she was wearing diamond and behold, her diamond sat beautifully on her neck. She has many collections of diamond and gold and admirers were not suprised that she spotted one. She buys her diamond from Jewellery Affairs. No wonder K1 sang that only sophicticated women buy diamond from “Jewellery Affairs”.

Have you been told about Mrs Jolade Batolas fashion sense? The wife of APC’s Chieftain, Hon. Owolabi Batola, has eyes for good 18carat gold that matches with shoes and purse. She is one of the biggest luxury shoes owners in Lagos. Many cast admiring glances at her as she walked hand-in-hand with her hubby. There is a need to gist about Olori Kemi Adetona, the last wife of Oba Skikiru Adetona. The tall beautiful woman in her 60s stood tall in the special HOH for Mothers.

Erelu Tola Osifeso may be an Abuja-based rich celebrity, but her name could open many doors in Lagos. Her husband, Otunba Lekan Osifeso, is very close to Otunba Laide Fowosere. Her diamond for #olutemi was irresistible. So, also was Alhaja Mufuti Savage. She was a cynsoure of many eyes as her diamond spoke volume of how rich she is.

Do you know that Mrs Funke Akinyera snd Alhaja Taofikat, the New Otun Iyalode of Egbaland and the Fowosere are very close? This we can confirm to you free. Mrs Funke Akinyera, the brain behind “Strictly Bride” on Victoria Island” spotted the HOh for mothers. Many couldn’t help but admire her taste of 18carat Jewellery. She was not just up and doing, her shoes and purse kept shinning while she moved from table to table, attending to guests.

What about Olori Risikat Adams? She has been rocking Lagos social scene for over 35 years and still counting. The pretty wife of Olori Latif Adams shone like a star throughout. So, also is Yeye Olarewaju Batlan. The skincare expert, stole the show.

When Hajia Suliat Malo steps out at any Owambe, you would love her look and taste for fashion. She mostly adorns the best of 18carat gold. She was one of those who transformed her HOH into a blouse and iro. She enjoyed her self with her elder sister, Hajia.

One needs not to be told that the Oredein are 18carat gold lovers. Yes, Abiola Toto Abuga Oredein, Odun Oredein and her elder sister, all spotted unique 18carat gold.

Who told you the party was rocked by only celebs in Nigeria? No. Mrs Omotayo Bagboye flew in for the party from UK. She enjoyed the party with Mrs Omisade Omojowo, an ibadan celebrity woman.