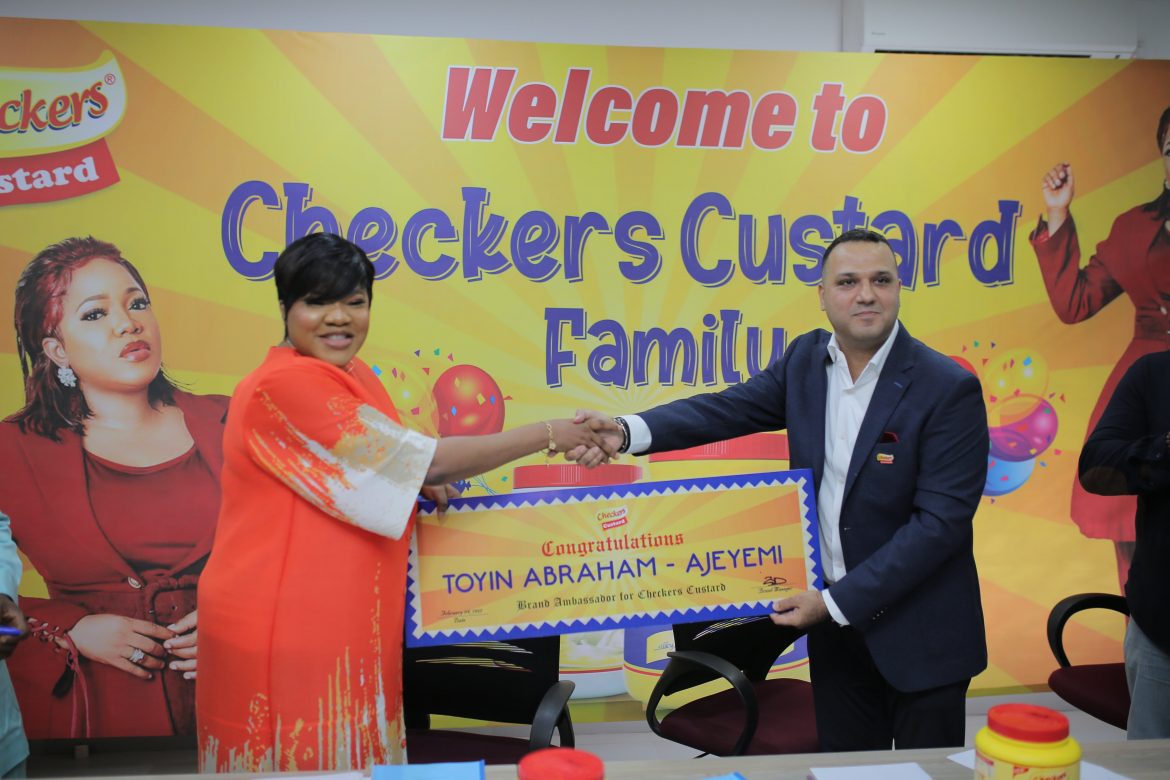 Ace actress and movie producer, Toyin Abraham-Ajejemi brought on the effervescence she is well known for as she was proudly unveiled by Checkers Africa Limited as the brand ambassador for its Checkers Custard. The event which took place at the head office of the company, was witnessed by the officials of the company, star actor, Kolawole Ajeyemi, who happens to be Toyin’s husband, as well as a cross section of the media.

The Managing Director of Checkers Africa, Karan Checker said it is a historic point in the life of checkers custard, which is Nigeria’s favourite brand. According to him, “We are greatly honoured to have the graceful presence of our dearest and loving favourite actress, film producer, influencer and mother”. He noted that Toyin has swooned millions upon millions of Nigerians at home and world over.

He enumerated the qualities the brand shares with Abraham-Ajeyemi as the reason she was chosen for the partnership. According to him, Checkers is the best, quality custard and pacesetter brand just like Toyin is a quality actress and a daring brand. Furthermore, he said checkers has various flavours, like vanila, banana and milk 3-in-1, with more surprising variants coming soon, while Toyin is an all-round excellent and ambitious acting talent versed in comedy and drama with more blockbusters coming soon. He also pointed out that checkers is silky, smoothest, creamiest and tastiest family custard in Nigeria and other lands across the border overseas, while Toyin is an adored actress, mother and wife in Nigeria and around the world.

Meanwhile Toyin passionately complimented Checkers Custard as her best and that of her children and husband. She said her husband takes it every day. She reminisced when she once couldn’t find it in the shop around her and had to send the company a message on social media, asking for where she could buy it.

It became somewhat of a symbiotic relationship when she was called by the company to be its ambassador. She said she is excited about the partnership, since it will be natural for her to push the brand as it is the favourite of her family. Hence, it is more than just an official partnership for her. She recommended the staple to everyone, including babies, toddlers, children and adults.

Those Behind The Anti Sanwo-Olu 2nd Term Campaign