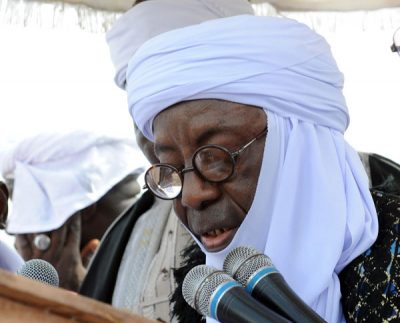 Akinola died on Sunday in Lagos at the age of 79 years, PM News reports.

However, the Lagos State Governor, Akinwunmi Ambode has expressed sadness over the death of Akinola.

The governor, in a condolence message signed by his Chief Press Secretary, Habib Aruna, described the development as a great loss to the Muslim Community, the State and the country in general.

He said the late cleric would be sorely missed and remembered for his bold and courageous sermons which stood him out in the present-day Nigeria.

The governor said the late cleric was a great man of God who spoke truth to power not minding whose ox was gored, and contributed immensely to the growth and development of the State.

He said: “It is with deep sense of great loss but total submission to the will of God that I note the demise of the Chief Imam of our dear State, Alhaji Garuba Akinola. He was indeed a respected cleric who was always mindful of his integrity and used his sermons to engineer positive changes in the behaviour and character of his followers.

“He was a devout Muslim; humanist and bridge builder and would be remembered for his fairness, boldness and thought-provoking sermons.”

Ambode, while commiserating with the family of the late cleric, urged them to take solace in the fact that he lived a fulfilled life and contributed immensely to the peaceful coexistence in the State until his demise.

“On behalf of my family and the people of Lagos State, I like to specially commiserate with the immediate family of the deceased and the Muslim Community for this great irreparable loss,” the governor said.