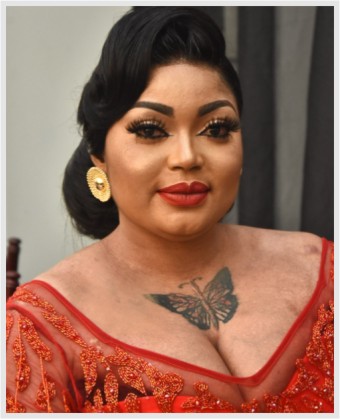 Sunday 29th September, 2019 would forever remain indelible in the minds of female entrepreneurs who were honoured at the 2nd edition of City People Female Entrepreneurs Awards; an annual event which is meant to celebrate outstanding women who have distinguished themselves in their various businesses.

This year’s event took place at the prestigious Lekki Coliseum; a popular event centre in Lekki. The hall was beautifully decorated by Subtle Elegance; one of the best handlers in decorations/parties.

At 3pm, red carpet started with the arrival of dignitaries, celebrities, top entrepreneurs, society women who came in enmasse to witness the second edition of City People Female Entrepreneurs.

MC PLUTO WAS THE COMPERE

MC Pluto is one of the best comperes in Lagos, and he showed that during the 2nd edition of City People Female Entrepreneurs Award, 2019. He kicked off the event with the citation of the Nigeria National Anthem. Shortly after, he introduced the Publisher of City People and also introduced some important personalities who were early comers and some of them include: Mrs. Joko Oni, CSP Dolapo Badmus, Toyin Lawal, Jadesh, and a whole lot of others.

The popular Lagos big babe, Jadesola Odumosu Abiodun, popularly called Jadesh was the first to be honoured for doing well in the cream business. The beautiful lady was honoured as Most Promising Cream Brand of the Year. Some of her guests who came with her include: Taiwo Odumosu, Bola Odumosu, Damilola Odumosu, Adebola Odumosu, Adenike Koledafe, Mariam Oyinlola Adefowora, Bode Gabadin (Commissioner).

The award was presented to her by Madam Joko Oni and MC Pluto.

One of the most outstanding make-up artists in Lagos is T Shakky. Her brand has done a lot in the make-up business. She was honoured with the Most Sought-After Party Make-Up Artist of the Year Award. Some of her guests at the event include: Mr. Shakiru Adebayo (husband), Mr & Mrs. Awosusi, Mr. Wale, Mr. Yusuf and many others.

One of the most outstanding fashion brands in Lagos is Fabulous Outfit. She was honoured as the Most Sought-After Senegalese Brand in Ibadan. Some of her guests include: Femi Laniyan, Sola Raji, Mr. Idowu, Bimbo Ajibola, Funmi Peters, Debbie Laniyan.

One of the most outstanding fashion personalities is Mrs. Bimbo Benjamin. She was honoured for her remarkable success in fashion business. Her guests who came to celebrate with her include: Anita Yesufu, Aunty Joko Oni, Nike Fashina, Temi and others.

Mrs. Tosin Osinowo is a popular  fashion icon in Ibadan, who recently went into food business (Amala). Her food business is well known around Ajao Estate area, in Lagos. She was honoured as Most Promising Amala Vendor Award. She came with some of her friends and family.

Kiks Place is one of the most promising fashion brands in Nigeria. They are one of the big awardees at the 2nd edition of City People Female Entrepreneurs Award. They were honoured for their unique Kaftan Designer of the Year Award.

Kreative Cocktails is owned by pretty Biodun Agbalajobi  is one of the most outstanding coctails brands doing well at parties and that was why they were honoured as Outstanding Cocktail Brand of the Year Award. Mrs. Lara Dende, Hon. & Mrs. Toyin Suarau, Mr. Taiwo Daudu, Kehinde Dauda, Mrs. Ololade Salami, Mrs. Olabisi Ajenifuja, Kunle Folorunsho, Olori Adetokunbo Eko, are some of her guests.

Alhaja Tuwo Pama is one of the women doing well in business. She was honoured at the 2nd Edition of City People Female Entrepreneurs as Traditional Cuisine of the Year. Some of her guests include: Wale Jebe, Babatunde Yusuf, Remi Fowler, Olajumoke Jebe, Juwon Ajala, Shobande Alex, Oyindamola Ajoke Abiola, Raphybeauty Makeover (Abike).

Boladel the name of a popular food vendor in Lagos. They emerged Male Food Vendor of the Year. Some of her guests include: Bunmi Adeleye, Abosede Ogbonna, Kehinde, Funmi, Bimpe Azeez.

She is one of the award winners who was highly excited for her award. She got a special recognition as she was honoured for her remarkable success in beauty business. The name of the brand is Poshglow Cosmetics. Some of her guests indluce: Abisoye, Nkechi Blessing, Ehis, Victoria, Ogunsanwo Tosin, Modele, Ale Tosin, Olufunke and many others.

Heiresscouture Nigeria, one of Nigeria’s finest kiddies fashion brand was honoured as Kiddies Couture Fashion Brand of the Year. The name behind the brand is Kemi Goodey and she came with some of her guests: Tobi Ogunbiyi, Jare Yomi, Joba, Awoyemi Sunday, Ijalawa.

One of the most promising event planners in Lagos is Goditeventsolution. The name behind the outfit is Omobolanle Gold. Her brand was honoured as Most Promising Event Planner of the Year. Some of the guests who came with her include: Bukola Shekoni, Mr. Frank Ikuewan, Mr. Ayoola Olawale, Saheed Alle, Babatunde.

One of the most celebrated event decors in Nigeria is Subtle Elegance. The outfit was honoured for her remarkable success in event decoration. Those who came to collect the award include: Abimbola Oladiran, Adebukola Animashaun, Arinola Odunuga, Ololade Adekunle. This is the outfit that designed the Lekki Coliseum for the 2nd City People Female Entrepreneurs where the programme took place.

One of the best fashion outfits in Nigeria is Twenty Sixth Stitches. The outfit was honoured as the Hottest New Designer of the Year. Love from Jolez, Joke Ogedengbe, Azeez Ogedengbe were some of her guests.

Party dreams is into kiddies souvenirs and they are well known for doing well in that regard. They were honoured as Kiddies Souvenir Company of the Year. The big name behind the brand is Emmanuella Ropo. Some of her guests include: Cherry Mohammed, Flora Olayemi Okoro, Gbenga Okoro, Adebayo Ishola, Olajumoke Ajisafe, Ayoola Iyabode, Oladipupo and Kemisola.

Brown Sugar-FBIMS was honoured as Queen of Blings Award. She came with her Zee Stitches, Bolawatife, Modetoluwo, Damilola.

House of Phreeda is one of the most outstanding spa outfits in Lagos now. The outfit emerged Spa of the Year at the 2nd Edition of City People Female Entrepreneur Award. Her guests include: Yetunde Eniola, Mopelola, Morenike Awoyemi, Bode Adetola.

Mrs. Foluke Adedokun’s outfit Fruitworld was honoured as Fruit Dessert stylist of the year. She came with her friends, Mrs. Bisola Bamidele (Alaga Iyawo) and they both shared the same table and guests.

One of the best fashion outfits in Nigeria is Ajibo Fashion World. This outfit was honoured for it’s success in the fashion industry. Some of their guests include Margaret Effiom, Princess Adaeze, Tracy Omoti Saliu.

Boomingdale was honoured as Most Sought-After Kitchen Utensil Store of the Year. Some of her guests include: Babayemi Remilekun, Odedeyi Oluwakemi, Alabi Oluwatosin, Fadairo Oluwaseunfunmi, Sosu Oluwafemi, Ojo Kayode.

Abishine Jewelry is one of the big brands doing well in the business of jewelry in Nigeria and they were honoured for this. The got unique jewelry accessories of the Year. Some of the guests include Alhaji Mudashiru Odetunde, Peter Rebete, Fadeke Ajibade, Badmus Samuel, Oladehinde Hassan, Bolaji Pitan Olatunde Ogunfowora.

Alhaja Taofikat Babayemi is the CEO of Palm 77 Luxury Hotel. City People honoured the hotel as Luxury Hotel of the Year. Some of her guests include: Mr. Tosin, Mr. Odeyemi, Mr. Titilayo, Mrs. Jumoke.

Mrs. Jumoke Animashaun emerged the Most Sought-after Party Lace Seller of the Year. Some of her guests who came with her include: Hardiva, Flinct Fashion, Biddysmondo.

Meeyas Gold emerged Young Gold Merchant of the Year, the plaque was received by her brother Mr. Azeez Ogedengbe.

Toyin Lawani is one of the biggest babes in Lagos. The beautiful lady was honoured as the most enterprising brand in Lagos.

Mrs. Bimbo Ipaye is one of the big names in the Aso-Oke business. She emerged Celebrity Aso-Oke Designer of the Year. Some of are guests at the event include Justina Oladunni, Oluokun Adunnola, Agamade Justina, Ogboji Blessing, Bello Abigail, Anthony, Oparaji Amarachi, Akeem Aminat.

Though, she was absent at the event but she sent a powerful delegate to represent her. Princess Adeshola Haastrup was her representative as Dr. (Mrs.) Folashade Okoya emerged Most Inspiring Manufacturer of the Year Award. Some of her guests who came to represent her include: Mathaniel Samuel, Mr and Mrs. Nelson Uzum, Mr. Andrew Fashikun.

There was fashion parade and Eleganza products courtesy of Dr. Sade Okoyo were presented to some outstanding contestants.

Dr. Lolade Abuta is one of the most outstanding female realtors in Lagos. She was honoured with a special recognition award. Some of her guests include: Simon Adozi, Mrs. Funke Kehinde, Ayomide Kehinde, Benita Mberekpe.

Supreme Empire emerged most sought after gold merchant in the USA. Dunni Olatunji, Perosaiyemi Adeniyi, Funke Doherty, Mr. Bello, Beun Buzugbe are some of her guests at the event.

Idera Fabrics emerged Fabric Merchant of the Year. This beautiful woman stole the show as some of her friends who came to celebrate with her dazzled in same outfits. Some of them include: Alhaja Taofikat, Daramola Adetola, Daramola Dare, Akole Olajide, Akole Titilayo.

There is no doubt she was one of the biggest winner of the night as her outfit won two major awards. She won the Most Enterprising Beauty Expert of the Year and Most Promising Indegenous Make-Up brand of the Year Award.