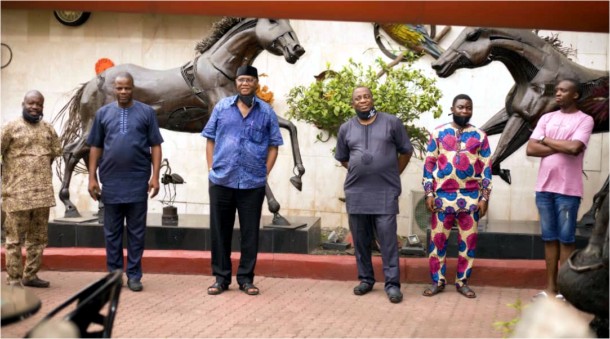 •What Many Don’t Know About The Prince

His name is a big one in the Arts community globally. This is because he is a big Arts Collector who has a huge collection of Artworks, Sculptures, Painting, in the original.

That is why once you mention the name Prince (Engr.) Yemisi Adedoyin Shyllon anywhere around the Arts community you will be told who he is. So in love is he with Arts & Culture that he set up Omooba Yemisi Adedoyin Shyllon Art Foundation (OYASAF). As part of City People Magazine activities to mark the 25th anniversary of the brand, a City People Team recently paid a courtesy visit to Nigeria’s largest private art collector, Yemisi Shyllon, in his Maryland, Lagos home on Thursday 11th, February 2021, to say Thank You for being part of the brand from the outset. The visit was led by the Publisher, Dr Seye Kehinde.

For those who are curious about the man and want to know more about his personal achievement in Arts and Culture, what we discovered about him last week will definitely feed your hunger.

At about 2 pm on Thursday 11th of February, our City People Magazine Team arrived his Museum, which also doubles as his home in Maryland, Lagos. We were asked to park outside his gate and some of us wondered where we were, and immediately we identified ourselves at the gate, we were ushered in by the Security man. We had to go through thorough screening because of the pandemic. Right from the security house where we were screened were beautiful and memorable artworks. And that explained why we had to park outside his compound.

Right from the security post, are a great collection of artworks, both left, and right sides. The compound should be about 1,500 square metres of land. Shortly after, his Security man again led us to where unarguably Nigeria’s largest private art collector, Prince Yemisi Shyllon was waiting for our arrival. We met him fully prepared in his “Kampala” attire. He is a man of simple taste.

We had a good reception as he welcomed us in a warm manner. Immediately we all introduced ourselves, the Publisher, thanked (Prince Yemisi Shyllon) for his support over the years City People has been in existence. In our conversation with him, he told us many things City People should be doing as a brand. He told us his ideas on how to move the brand forward and he also shared with us the many things people don’t know about his person.

He started by praising City People for its tenacity of purpose over the years. But he said things have to be done differently because the world is changing and we are in a Covid-19 era, where the use of technology is advisable for any brand to embrace. “The Covid-19 environment dictates that one should be innovative, even post Covid-19 environment should be less hard copy journalism. Again, the present generation is more attuned to information technology and they aren’t much attuned to hard copy information, so having that in mind, I would suggest your organisation should begin to explore what other successful media houses are doing now. You don’t need to reinvent the wheel, you can keep hard copy and expand the information technology world. And it has one great advantage; it has a better reach. The youths. And that constitutes about 60 percent of the Nigerian population. You have better volume in terms of circulation. The world is changing and we also have to change with it.

There would be lesser magazines in the future, so I would suggest you create a team that would look into the future for City People. A team led by an IT-oriented person, to look at what is being done by similar organizations in the world and how they are reaching the world at the minimum cost. So there should be a team in City People that should be called an Innovation Team led by someone with an IT background.

For instance In my own Museum, even though the Covid-19 affected us but we were able to reach the World. In November last year, we won the Museum Opening Award. We did museums in Britain, Germany, Austria. They shortlisted us to 8 and the Yemisi Shyllon Museum won the Apollo Award for 2020. And we were able to win because we place less emphasis on physical visitation and we create sellable packages online that don’t exist in our 35 museums in Nigeria and Africa. You must bring your brand closer to the people and how do you bring it closer to the people? It’s by increased digitalization”.

City People also asked him how he was able to transit from Old School to New School. He described himself as a multi-facet man. “At the age of 37, I was Chairman of OGTV/OGBC. I was the first man to build the state government FM Station In Nigeria and I named it the station of the moment. I was the Chairman of the board of Television. I made OGTV what it is today. I’m a multi-faceted human being. I transverse finance. I’m a chartered stockbroker and investment analyst. I transverse engineering. I’m a fellow of the Institute of Engineers. A fellow of Chartered Institute of Stockbroking and investment. I’m a lawyer of 30 years standing. I’m a fellow of the chartered institute of marketing…I can go on and on. I have transversed many professions and I have headed many organizations, both corporate and statutory from the age of 26. I was made a manager at UAC when Unilever was Unilever at age of 29 and I became the director of the multinational company at age 31.

Another thing I think people don’t know about me is that I’m driven by the search for knowledge. I want to know what I don’t know. This morning I woke up around 2 am to read and I had to stop around 5 am because I knew I have an appointment with you today at 2 pm. Otherwise, I would read till about 9 am and sleep off. I read a lot

Secondly, I wanted to be a genius from when I was a kid and I set out to acquire knowledge beyond the classroom. You must read wide. I have delivered a lecture at Harvard University, not in engineering, not in law, not in finance, not in marketing, not business but art. I have represented Nigeria in Dubai; the Dubai government gave me a first-class ticket in 2014.

I don’t want to be poor and I also don’t want to be a failure. Those are the two things I don’t take lightly. When I was at the University of Ibadan. And you know they don’t pay you if you are on scholarship. So I took on my university lecturer’s kids. On Saturday I would go round to teach them Mathematics and Physics and that was how I was making some money. And that was when I started buying Shares and Arts.

One King, One Tribe, 5th Year The Solomon of our Generation – By Sijibomi Ogundele