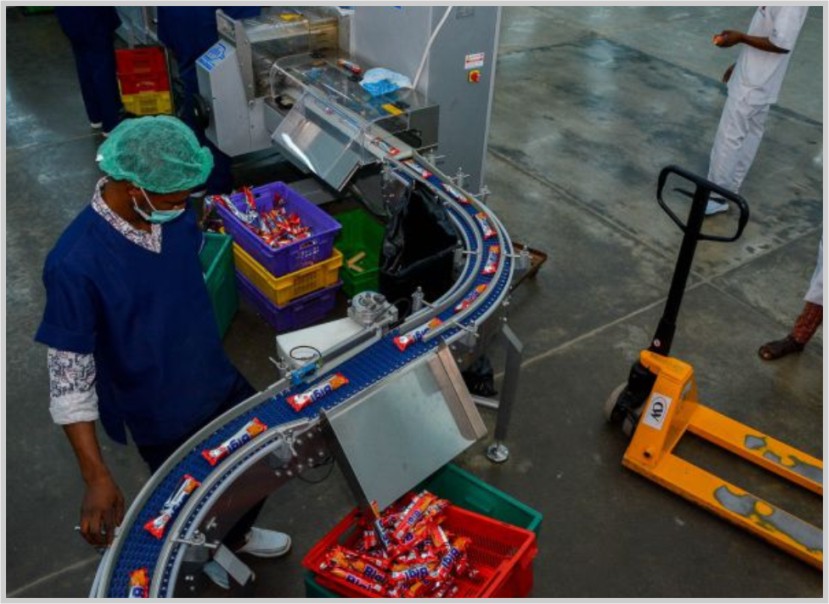 •Where BIGI Drinks & Many Products Are Produced

There has been a serious battle in different sectors of the Nigerian food industry especially in the Energy drinks and carbonated soft drinks (CSD) markets due to the creativity and disruptive instinct of a made in Nigeria brand, Rite Foods. Bigi soft drinks with unmatched 12 different flavours have become one of the topmost gladiators in the CSD War, Fearless energy drinks has completely taken over the energy drinks market with its innovative pet bottle introduction and its red berry flavor, an introduction that has become a pacesetter in the market while Rite’s Sausages are also doing very well on their own as well.

These feats and many more made City People’s Brands & Products visit the Ososa factory of Rite Foods to see where the magic is emanating from and what the company is doing differently that has placed it on a pedestal that can be rarely matched.

WHERE IT ALL STARTED FROM

Rite Foods MD, MrSeleemAdegunwa revealed to Brands & Products that the company started its sausage roll production in Opebi, Lagos. But after a tremendous increase in the demand for the sausages that gave Gala of UAC a run for its money, it became a necessity to expand its production; hence, a need for a larger and world-class factory where demands can be met so easily.

‘Due to tremendous growth in sausage sales, production had to increase at an equally high rate which resulted in the construction of a larger production factory at Ososa, Ijebu– Ode and opportunities to implement our other product diversification plans. Bakery Factory construction at Ososa, Ijebu Ode, began in 2013 and was completed in 2015. In 2015, Rite Foods Limited moved its entire Bakery factory into the new factory.’

THE UNTOLD STORY OF A MADE IN NIGERIA BRAND

The Rite Foods factory is truly an economic trend that is shaping not just Nigeria but the whole of Africa. The factory has five production lines which include the bakery, premium water factory, Bigi CSD factory, Fearless Energy Drinks Factory, Pet Bottle Production factory and also recycling. The factory is located about 90 kilometers away from Lagos, a distance that is favourable due to its proximity to the largest market in Africa. In less than two years when production began at the factory, Rite products had become more visible than many of its competitors especially the multinational firms. One will begin to wonder what would have been responsible for this, but you need not guess anymore as Brands & Products already did the findings for you.

Brands & Products was taken on a factory tour by the Production Manager, Mr. Michael Ibikunle, which started at the state-of-the-art bakery that produces 27,000 sausages per hour.

One of the selling points of the Rites sausages that is not revealed to many is its level of hygiene before, during and after production. Rite sausages are produced with very minimal human contact. Starting from the mixture of the flour, to the shredding of the beef and every other process, robots have been placed at every section of the bakery to perfectly do the job to avoid contaminations. While many companies and factories are still thinking about artificial intelligence, Rite Foods are already miles ahead and this is a factor that places the Nigerian outfit ahead of many of its contemporaries in the nation’s food business.

Another factor that stood out Rite Foods is its high level of proper maintenance culture. Right in the factory, all the equipment looks brand new. One would think that they were just imported yesterday; meanwhile, the facility is almost a decade old. ‘the facility you just walked through is already going to almost ten years now, the production manager revealed. It’s in our nature, it boils down to the excellent culture that we imbibe, he concluded.

Mr Seleem while speaking on the facilities said ‘take a look at these facilities, I can boldly say that it is best in this sector. We can stand shoulder to shoulder with any other international firm, so we are not even talking about Nigeria now. We want to lead the continent and we have to do so by always bringing qualities to the table. When you even go to Europe, this will still come out as one of the best you’ve ever seen because just as our vision already said, what we intend to be is the leader in our chosen field.’

Excellence is achieved when it is deliberate. This is one the motivating factors for Rite Foods. Brands & Products observed and saw that every raw material needed to have a complete Rite Foods product is produced within the factory. Nothing is imported from any other factory.

Let’s be the first to inform you that rite foods produces its own pet bottle and cork. There is a machine within the factory that is known as ‘blower’ which shapes each pet bottle to the required size and shape. Aside from this, all the labels used are automatically wrapped around the bottles by another machine, all automated.

Brands & Products also visited the Rite Foods power plant and you will be amazed at what we saw there. One major challenge with production in Nigeria is the epileptic power supply that has sent many foreign industries packing because of their inability to sustain power generation. That being said, Rite Foods looks to have grown beyond that as it generates its own power supply independent of the government. The company has three sources of power namely, gas generator that produces about 23-megawatt electricity, gas and diesel generator that produces about 20-megawatt electricity and solar energy that produces 1 megawatt electricity.

One of the executives present at the factory tour was the company’s Brand Manager, Miss BoluwatifeAdedugbe who shed more light on the quality of Rite Foods Ltd products as approved by the federal government.

She said it was the company policy to comply with regulatory bodies such as the National Agency for Food, Drug Administration and Control (NAFDAC), Standards Organisation of Nigeria (SON) and other national and international standards.

“So, anything you see us producing is because somebody has made an order for it, if they don’t make an order, we don’t produce because no customer will buy a product that’s not fresh, everybody wants to buy a product that’s fresh, some of the products are traveling far places like Onitsha and Port Harcourt, among others.

“It’s important that customers are getting it fresh and also the customer needs to get it the same day because if it’s getting late people may not want to buy it, they are losing before it get to the distributor, before it gets to the retailer in just within ten days, it has to be fresh so that the person buying it would buy it fresh as the first day it was produced.

“That’s to imply that we produce only when a customer makes an order, it has to be fresh because some are going to majorly South-East, South-West, and South-South because we can’t go to the North for now because of the distance, it takes days to get to the northern parts of the country,” Adedugbe said.

HOW RITE TRANSPORTS PRODUCTS FROM TO OTHER STATES ACROSS NIGERIA

On transportation, she said the company has three models of transportation but blended the three models into one loading bay. She said the palletized was for those who actually want it, for the Eastern part of the country they dwell more on the containerized body, while the Northern part prefers using their vehicles, so irrespective of tribe, race and region, the company is ready to give what customers want.

List Of KALABARI Politicians Who Want To Be RIVERS Gov.