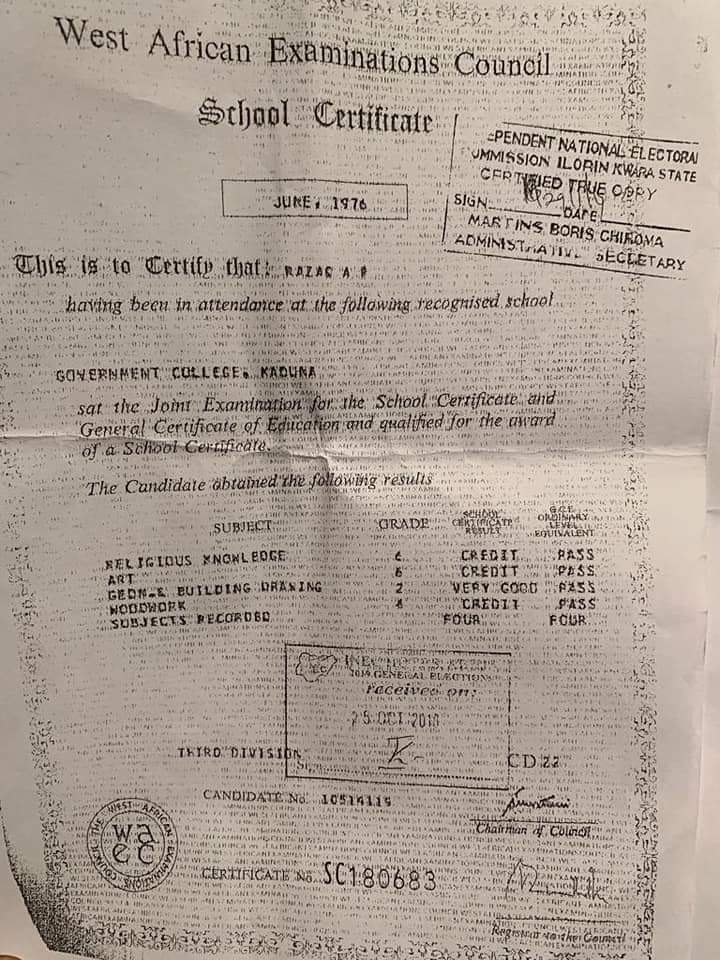 Coalition of Political oppositions in Kwara has raised concerns over the alleged moves by the Counsels to the Governor of Kwara State, Alhaji Abdulrahman Abdulrazaq and the All Progressive Congress, (APC), with the support of the senior officials at the West Africa Examination Council, (WAEC) to frustrate the judicial process in the on-going election petition tribunal sitting in Ilorin.

The counsel to the petitioner, Abdulwahab Bamidele, in the statement released to journalists on Monday, June 17, 2019, noted that the trivial and frivolities adopted by the defendant is a pointer that the APC, lacks genuine evidences to present to the court and therefore trying mechanism to delay proceedings and tamper justice.

Recall that the Peoples Democratic Party, (PDP) and the Action Alliance, (AA) have dragged Governor Abdulrahman Abdulrazaq to the election petition tribunal challenging the authenticity of his WAEC certificate which he submitted along with other documents to contest the March 9, 2019 governorship election in the state.

The Chairman of Election Petition Tribunal, Justice Bassey Effiong on Thursday adjourned to Friday to enable a representative of the West African Examinations Council (WAEC) to present evidence of the writ commanding him to appear in court in order to confirm the authenticity of the document.

He gave the order, after PDP counsel, Paul Erokoro, SAN, requested the tribunal to stand down the case for Mr. Waheed Amode, the WAEC Branch Controller for the state to present evidence of the subpoena, proving that he was asked to represent the examination body.

Mr Bamidele added that there are claims that the officials of the West African Examination Council (WAEC) in Lagos which the tribunal mandated to produce the subpoena missed their flight to Ilorin on Friday morning.
Justice Bassey Effiong therefore adjourned the sitting to July 9, 2019 in order to enable the WAEC officials appear and confirm the authenticity of the Certificate presented by the Governor of Kwara State, Alhaji Abdulrahman Abdulrazaq.

Mr Bamidele disclosed to Journalists that all the moves by WAEC officials is an attempt to frustrate the judicial process and exhaust the time-band for the argument of the case in order to favour the respondents.
“We urge the general public to follow the process with keen interest in order to ensure that justice, and good governance prevails in the nation”, they said. Furthermore, it was added WAEC should be careful that their credibility as an international examining body is not tarnished in the quest to corruptly protect the interest of one individual.
WAEC’s reputation in Nigeria is already shaky with reports of widespread cheating at examination centres and individuals parading fake results. If this sad situation is not addressed quickly, WAEC certificates will soon lose their value internationally – to the detriment of countless honest, dedicated and hardworking individuals”, he said.